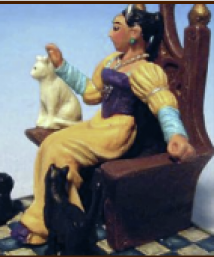 Beruthiel and her cats by Herbert Lukaszewski
Queen of Gondor and wife to Tarannon Falastur.  Beruthiel was likely of Black Numenorean descent.  The Black Numenoreans were men who joined Sauron from southern Numenor.  These men had survived the island's downfall and established realms in the south.  This queen was described as being "nefarious, solitary, and loveless."
Queen Beruthiel was born sometime in the early Third Age.  She married King Tarannon Falastur, but they were unhappy together.  It could be that their marriage was arranged to keep peace with the realms in the south.  If so, it was ineffective.
Tarannon was a great ship-lord residing near the Great Sea.  Beruthiel hated the sea, so she moved to live in her husband's other home in Osgiliath.
Whilst there, Beruthiel returned to the evil ways of her people.  She used her ten black cats and one white cat to spy on the people of Gondor.  Beruthiel did not trust her black cats, so she told her white cat to spy on them.  It is thought that Beruthiel was used to spy by her people because they wanted to know what Gondor's battle plans were.  It could be, however, that she was working on her own.
Beruthiel had no children with Tarannon Falastur.  Eventually, it was discovered that she was a spy, and Tarannon banished her from the kingdom of Gondor in a small boat with her eleven cats.  They sailed southward passed Umbar, but Beruthiel's ultimate fate is unknown.

The name Berúthiel is of Sindarin origin.  It could mean something like "Angry Queen", derived from ber(eth), meaning "queen" or "spouse," and rúth, which means "anger."  The suffix -iel is known to be feminin.

The Unfinished Tales: "The Istari", note 7
The Lord of the Rings, The Fellowship of the Ring, "A Journey in the Dark"
All Pages Copyright © 2010, The Middle-Earth Encyclopedia