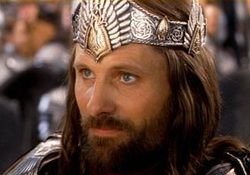 Crown of Gondor in the New Line film
Crown warn by the King of Gondor.  The Crown of Gondor was shaped like a Numenorean helmet.  It was made of silver with two golden wings at its sides and a large golden wing in the front with the White Tree engraved upon it.  It was first warn by Isildur in the War of the Last Alliance against Sauron in Mordor.  King Atanatar II Alcarin forged a new crown in circa 1200 of the Third Age.  It was warn by the Kings of Gondor ever since it was made.  King Earnur left the crown on his father Earnil's coffin and went to war, where he was not seen again.  The Crown of Gondor remained there, for the rule of Gondor was passed to lesser men or Stewards because Earnur left no heir.  In May of 3019, the Crown was placed on a stick of Lebethron wood and given to Aragorn II, King Elessar, High King of Gondor and Arnor.  Aragorn wore the Crown until his death, when it was most likely given to his son Eldarion. 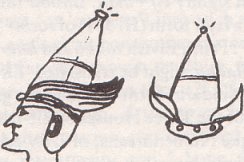