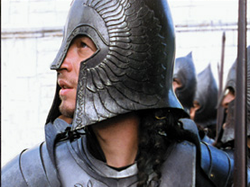 Decipher Card of Dervorin
Soldier of Gondor.  Dervorin was the son of the Lord of Ringlo Vale, but his name is not known.  Dervorin was from southern Gondor.
On March 9, year 3019 of the Third Age, Dervorin led a force of three-hundred armed men north to Minas Tirith to defend before the Battle of the Pelennor Fields, which was fought on March 15.  His fate in battle is unknown.

Dervorin is a name of unknown meaning.  It could be composed of der, meaning "man," and vorin from voronda or vórima meaning "faithful" in Quenya.

The Lord of the Rings; The Return of the King: "Minas Tirith," page 43
The Unfinished Tales: "Cirion and Eorl," page 317 note 43
The History of Middle-earth, Volume V, The Lost Road and Other Writings: "The Etymologies"
All Pages Copyright © 2010, The Middle-Earth Encyclopedia