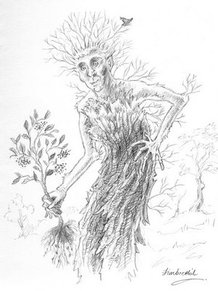 Fimbrethil by Sue Wookey
Wife of Treebeard.  Fimbrethil was an Entwife who once lived in Fangorn Forest.  When Fimbrethil was young, she was extremely beautiful and light-footed.  As time passed, Fimbrethil grew old, bent, and brown with parched hair and red cheeks, but Treebeard always loved her.
At some point prior to the War of the Last Alliance at the end of the Second Age, Fimbrethil and her fellow Entwives abandoned the Ents and journeyed east of the Anduin to start a garden.  Many years later, Treebeard went looking for the Entwives, but they was not where they had originally settled.  The land that Fimbrethil was said to have settled became known as the Brown Lands, and this region had been devastated by the War of the Last Alliance at the end of the Second Age.  The war may have killed the Entwives, or they may have established gardens farther east.  It is not known what became of them.
On March 2, 3019 of the Third Age, when Treebeard and his Ents were attacking Isengard and anticipated death, Treebeard said that he would have liked to have seen Fimbrethil one last time.

The exact translation of Fimbrethil is uncertain.  The first element, fim, means "slender" in Sindarin, but the second element's meaning is uncertain.  Contradicting sources state that brethil either means "beach tree" or "birch tree" in Sindarin.