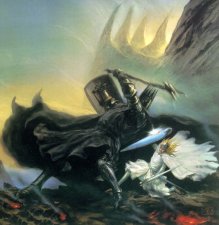 Fingolfin battling Morgoth by John Howe
Second son of Finwe.  Fingolfin had a brother named Finarfin as well as two sisters: Findis and Irime. Fingolfin married Anairë and had Fingon and Turgon.  He and his sons travelled to Middle-Earth and settled in Beleriand, where they were crowned Kings.  However, the enemy Morgoth was on the move.  Since year 7 of the First Age, Fingolfin was High King of the Noldor.  In 456 of the First Age, the Battle of Sudden Flame broke out.  Fingolfin was killed after taking Morgoth on single handed.  Turgon built a cairn to protect Fingolfin's body.