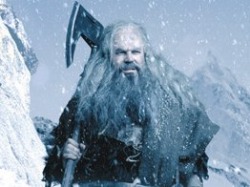 Decipher Card of Grimbeorn
Son of Beorn the Skinchanger.  Grimbeorn was the leader of the Beornings, a group of Beorn's descendants and followers, during the War of the Ring in the late Third Age.  It was said that Beorn's descendants inherited his ability to change his shape, so Grimbeorn may have had the ability to shapeshift as well.
Beorn died sometime before the War of the Ring, and Grimbeorn became leader of the Beornings.  The Beornings lived between the River Anduin, Mirkwood, and the Misty Mountains.  They guarded the High Pass from Orc invasion.  The Beornings were wild and vicious people who opposed the allies of Sauron, particularly Orcs and Wargs of the Misty Mountains.
Grimbeorn was very old at this time of the War of the Ring.  He closely guarded the High Pass and made travelers pay high fees to him if they wished to pass over the Misty Mountains via the High Pass.

The word Grimbeorn is Old English for the phrase "fierce man" or "fierce warrior." It can be derived from grim meaning "fierce" and beorn meaning "man" or "warrior."  Because of his age at the time of the War of the Ring, Grimbeorn was called Grimbeorn the Old.

The Hobbit: "The Return Journey," page 307
The Lord of the Rings, The Fellowship of the Ring: "Many Meetings," page 241
All Pages Copyright © 2010, The Middle-Earth Encyclopedia