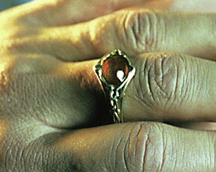 Narya in the New Line film
Elven Ring of Fire.  Narya was forged in 1590 of the Second Age by Celebrimbor.  The other two Elven Rings were Vilya and Nenya.  Narya was a golden ring with a red jewel.  It was the ring of Gil-galad.
As time went on, Sauron betray the Elven smiths and created the Ring of Power.  It controlled the Three Rings, the Seven Rings, and the Nine Rings.  In 1693, the Three Rings were hidden.  It was agreed that they would not be used.  Gil-galad first possessed both Narya and Vilya, but he soon passed Narya to Cirdan.
In circa 1000 of the Second Age, Gandalf came to Middle-Earth with the other Wizards.  Cirdan could tell that Gandalf was very wise and would use the Ring well, so he gave it to him.
Saruman heard word of this and became very angry and hostile to Gandalf.  It was, however, intended to be a secret and Gandalf rarely wore Narya and certainly never used it while Sauron had the Ring of Power.
At the end of the Third Age, after the War of the Ring, Gandalf war Narya in public and eventually took it with him to the Undying Lands on September 29, 3019.

Reproduction of Narya by the Noble Collection