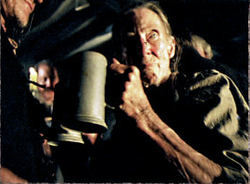 Decipher Card of a Ruffian
The Ruffians were an evil clan of men in service of Saruman.  They invaded Bree in 3018 and their men killed Rowlie Appledore, Tom Pickthorn, Mat Heathertoes, and Willie Banks.  In early 3019, the Ruffian armies marched to the Shire, which they took over quite easily, for Hobbit Lotho Sackville-Baggins let them in.  The Ruffians imprisoned many Hobbits in the Lockholes and cancelled major customary things like the Messenger Service.  They also imprisoned Will Whitfoot, Mayor of Michel Delving.  They were finally stopped in the Battle of Bywater, when the Ruffian leader was killed.  They retreated to their homeland.