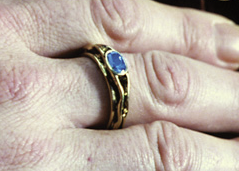 Vilya in the New Line film
Elven Ring of Air.  Vilya was forged in 1590 of the Second Age by Celebrimbor.  The other two Elven Rings were Narya and Nenya.  Vilya was a golden ring with a blue gem.  It was the second most powerful of the Rings of Power only to the One Ring.  Vilya was the ring of Gil-galad.
As time went on, Sauron betray the Elven smiths and created the Ring of Power.  It controlled the Three Rings, the Seven Rings, and the Nine Rings.  In 1693 of the Second Age, the Three Rings were hidden.  It was agreed that they would not be used.  Gil-galad first possessed both Vilya and Narya, but he soon passed Narya to Cirdan.  At his death in 3441, Vilya was given to Elrond.
Elrond used Vilya after the One Ring was no longer in the hands of Sauron.  It protected the borders of Rivendell and restored the historic city.  When Elrond left Middle-Earth bearing Vilya on September 29, 3019 for the Undying Lands, Rivendell faded.  This was because the One Ring was finally destroyed and Sauron had finally perished.

Reproduction of Vilya by the Nobles Collection