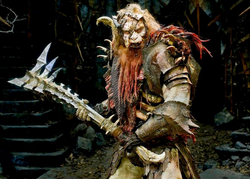 Bolg in The Hobbit movie
Orc commander of the Battle of Five Armies; son of Azog the Great.  Bolg's father Azog was killed by Dain II Ironfoot at the Battle of Azanulbizar in 2799 of the Third Age.  Bolg's rage was renewed when Thorin and Company killed the Great Goblin in 2941.  Bolg gathered an immense force of Orcs and they met at Mount Gundabad.  From there, the Orcs met with Wargs and marched through the Grey Mountains where they were joined by a cloud of bats.  They continued marching east until they reached the Lonely Mountain.
When Bolg's force of Orcs and Wargs arrived at the Lonely Mountain, they surrounded the Dwarves, Wood-elves, and Lake-men who were negotiating with one another inside the Mountain.  Bolg himself was protected by a number of body guards who bore thick scimitars that protected them from harm.  Thorin tried to break the line of body guards, but he was fatally wounded in the process.  The tide of the battle turned in favor of the alliance of Elves, Dwarves, and men when Eagles arrived, and when Beorn arrived in the shape of a bear.  Beorn killed Bolg on the battlefield.  Bolg's force was ultimately defeated and all of his warriors were either killed or driven away.

The meaning of the name Bolg is not known.  He was also known as Bolg of the North.