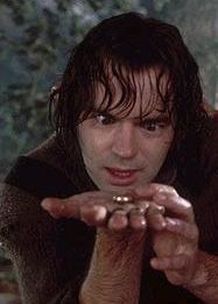 Deagol played Thomas Robins in the New Line film
Deagol was the finder of the One Ring on Smeagol's birthday.  Deagol and Smeagol were once friends.  They lived in the Vales of the Anduin with their people, the Stoors.  The Stoors were Hobbits who were not of Fallohide origin.
One day in 2463 of the Third Age, Deagol and Smeagol were fishing.  Deagol caught a large fish on their line.  The fish dragged Deagol into the Anduin, and he nearly drowned trying to catch it.  The fish escaped.  Deagol was about to swim back to the surface, when he found a shiny ring.  He swam back to shore and gazed at it.  Smeagol gazed at the ring as well.  Smeagol said that it was his birthday, and he would like the ring as a present.  Deagol, in a trance, argued that he had found the Ring, so he should be able to keep it.  Smeagol, overtaken by desire for te Ring, strangled Deagol to death.  Smeagol took the ring for himself, and it gave him unnatural long life.  Smeagol came inhabited the darkest tunnels of the Misty Mountains for many years to come.

The name Déagol is an anglicized form of Nahald, meaning "secret."  Nahald was Deagol's name in the language of the Stoors of the upper Anduin.