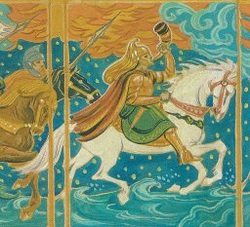 Eorl the Young by Alan Lee in the New Line film
Eorl the Young was the founder and first king of Rohan.  He was born in year 2485 of the Third Age.  He was the son of Leod, Lord of the Eotheod.
Eorl was a great horse-back rider.  His father Leod was killed by a wild horse called Felarof that he was trying to tame in 2501.  Eorl was only 16 at the time.  This meant that Eorl became Lord of the Eotheod at only 16, which was why he became known as "The Young."  Despite having killed his father, Eorl kept, cared for, and successfully tamed Felarof for the rest of his life.
In 2510, Borondir Udalraph of Gondor sought aid from Eorl, reporting that Gondor was under attack by both Orcs and Balchoth.  Gondor alone would have lost the upcoming battle.  However, with Eorl's aid of the Eotheod riders, they may have had a chance at victory.  On April 15 of 2510, Eorl answered the call for aid and the combined forces of Gondor and the Eotheod were able to defeat the enemy in the Battle of the Field of Celebrant.
For his service to Gondor, Eorl and his people were granted the land of Calenardhon, which became Rohan.  The gift was granted by Cirion, Steward of Gondor.  In return for the gift, the people of Rohan would have to aid Gondor in times of need.  This compromise was known as the Oath of Eorl.
In order to settle in to Rohan, Eorl built the House of Rohan in Edoras.  He had a son named Brego in 2512.  This son would become his heir to the throne of Rohan.
In 2545, the Easterlings attacked the Wold, a more remote region of Rohan.  Eorl himself  was killed, but nevertheless the Rohirrim achieved victory over the Easterlings and drove them out of Rohan.  Eorl was burried in Edoras.  Brego succeeded him as king.

The name Eorl is Old English for "man of nobility."  An Eorl was the highest ranked person in the ancient North Germanic culture.