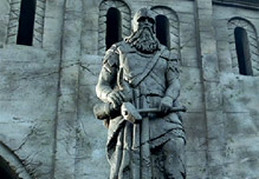 Statue of Helm Hammerhand in the New Line fiilm
Ninth King of Rohan.  Helm Hammerhand was born in 2691 of the Third Age.  He was the son of King Gram.  Helm had a sister named Hild.
Helm Hammerhand became king in 2741 upon the death of his father.  He married and had two sons, Haleth and Hama, as well as a daughter.
In 2754, Helm was given the last chance in Rohan's history to ally with the Dulendings.  Freca of Dunland, father of Wulf, offered his son to marry Helm's daughter.  Helm denied Wulf permission for this marriage, and Freca was enraged.  He led his own army to occupy Rohan's capital of Edoras, but in the hands of Helm Hammerhand he stood not a chance.  Freca was killed and his occupation of Edoras failed.
However, the armies of Freca returned to Edoras in 2758 with reinforcements from Dunland and other enemies of Gondor out of the south.  Led by Wulf, the armies of Dunland overran Edoras and the Rohirrim living there fled to the Hornburg, which became known as Helm's Deep, where they were kept under siege.  However, Helm was not powerless.  He often sounded his great war horn and rode out to slay many of the attackers.
By the end of the battle, Helm Hammerhand was slain.  The king's sons Hama and Haleth were also killed.  Helm's body was found frozen from the snow, still upright ready to fight.  Helm was remembered in spirit, and the Dunlendings believed his spirit still defended the Hornburg.
With no sons, Helm Hammerhand was succeeded by his sister's son Frealaf as king. 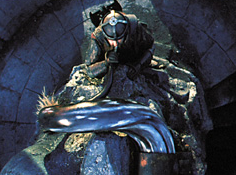 Helm is the Old English word for "protection."  He was called Hammerhand because it was believed he could kill any foe with his bare hands.