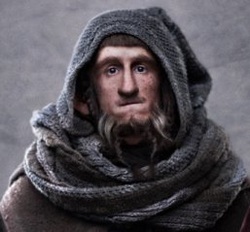 Adam Brown as Ori in The Hobbit movie
Dwarf of Thorin and Company of the line of Durin.  Ori was a distant relative of  Thorin Oakenshield.
In 2941 of the Third Age, Ori was selected as one of twelve Dwarves to accompany Thorin on his quest to reclaim the Lonely Mountain and drive out the dragon Smaug.  At the house of Bilbo Baggins, Ori played the flute over tea.  He was known to have large handwriting, often using Elvish script.    The quest was successful, and Ori was able to survive the Battle of Five Armies.  He settled comfortably in the Lonely Mountain after the quest.
In 2989, Ori joined Balin in his expedition to reclaim the mines of Moria, which had now long fallen into enemy hands.  The colony of Dwarves achieved victory over the Orcs there, but could only colonize the mines for five years.  In 2994, the Balrog awoke and slew most of the Dwarves.
Ori, Balin, and several others were locked in the Chamber of Mazarbul at the time of their deaths.  Frantically, Ori recorded his last thoughts in the Book of Mazarbul: "We cannot get out. The end comes.  Drums, drums in the deep.  They are coming. "  Ori died that day in 2992, whether by the fires of the Balrog or the spears of the Orcs who played the drums. 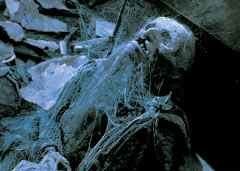 The name Ori is Old Norse for "delirious."   A dwarf named Ori appears in an Old Norse poem called Voluspa.