September 22, Year 2890 of the Third Age:
Bilbo was born in Bag End, Hobbiton, the Shire.  He was the son of Bungo Baggins and Belladonna Took.

2941:
April 25: The wizard Gandalf, an old friend of Belladonna's, visited Bilbo at Bag End. Gandalf encouraged Bilbo to go on an adventure, but Bilbo was in no mood to do so.
April 26: Gandalf arrived at Bag End with a party of thirteen Dwarves, all expecting Bilbo to accompany them on their quest.  They mistook Bilbo for a burglar looking for work because Gandalf had posted a sign saying that on Bilbo's door.
April 27: Bilbo set out on the Quest for Erebor with Gandalf and Thorin and his company of Dwarves.
May: Bilbo and the company stunbled upon the Trolls Tom, Bert and William Huggins in the Trollshaws.  The Trolls tried to eat them, but Gandalf kept them awake until morning when they turned to stone.  Bilbo picked up a sword called Sting amongst the Trolls' possessions.
June-August: Bilbo and the company were kidnaped by Goblins in the Misty Mountains but freed by Gandalf.  Bilbo became lost and he found the One ring and escaped Gollum.  He left the caves, ultimately being reunited with the company.
Early Fall: Bilbo leads the company through Mirkwood, rescuing them twice from enemies.
September 22: Bilbo and the Dwarf company arrived in Lake-town.
Durin's Day: Bilbo was able to enter Smaug's lair and see the dragon's weekspot on his underbelly.  This information eventually got to Bard the Bowman of Dale, who was able to slay Smaug soon after.
Mid Fall:  Men and Elves arrived at the Lonely Mountain seeking their share of Smaug's riches.  Thorin refused to negotiate; and even sent for aid from his fellow Dwarf Dain.  But then a host of Orcs and Wargs arrived and the Battle of Five Armies erupted in a bloodbath.  Bilbo fought in the battle.  Eventually, when the Eagles arrived, the battle was won.
Yule: Bilbo and Gandalf visited Beorn on their way back to the Shire.

2942:
May 1: Bilbo and Gandalf visited Rivendell one last time before their return to the Shire.
June 22: Bilbo returned home to Bag End.

2989:
After the death of Frodo's parents Drogo Baggins and Primula Brandybuck, Bilbo invited his young cousin to live with him in Bag End.

3001:
September 22: Bilbo threw a massive birthday party for his one-hundred eleventh birthday.  There he announced that he was leaving the Shire, and he left behind the One Ring to Frodo.

3002:
Bilbo reached Rivendell and lived there for many years to come  in the company of Elrond.

3018:
October 20: Frodo arrived at Rivendell with his companions and the One Ring.
October 25: At the Council of Elrond, Bilbo volunteered to take the One Ring to be destroyed in Mordor, but his claim was rejected because the Ring was now Frodo's burden to bear.
December 25: Bilbo gifted Frodo with the sword Sting and his coat of mithril mail and farewelled him from Rivendell.

3021:
September 22:  Bilbo set out from Rivendell with Gandalf, Elrond, and Galadriel.  They met Frodo in the Woody End and from there they journeyed to the Grey Havens.
September 29: As Ring-bearers, Bilbo and Frodo were allowed to sail over the Great Sea into the West.

Bilbo Baggins:
Bilbo was a meaningless name in the traditional Hobbitish language.  It was simply a common name given to male children.
Baggins is used as a reference to the word "bag."  It likely references the term bagging, used in northern England for "eating between meals."  Such a name references the very essence of Hobbit characteristics.

Bilba Labingi:
Traditional Hobbitish name for Bilbo Baggins.  The suffix a is used as a masculine ending in Hobbitish.

Burglar/Thief:
Gandalf told the Dwarves of Thorin and Company that Bilbo was a burglar looking for work.  In Gollum's cave, Gollum cried "Thief" after Bilbo because the Hobbit had taken the One Ring.

Below is a family tree displaying Bilbo and Frodo's branches of the Baggins Family. 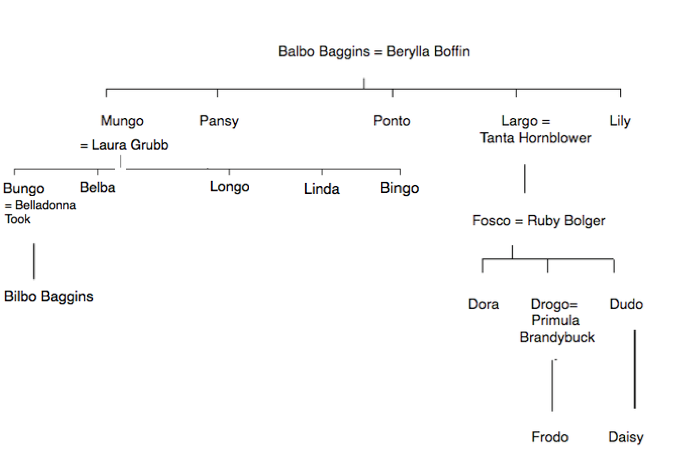