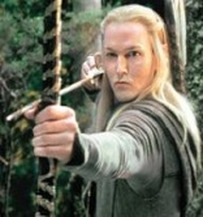 Jason Secto as Orophin in the New Line film
Brother of Haldir; guard of Lothlorien in the Third Age.  Orophin had another brother named Rumil.  Orophin, Haldir, and Rumils' origins are not known.  Orophin spoke the dialect of Sindarin that was spoken in Lothlorien.  He could not speak the Common Speech fluently.
On January 15, 3019 of the Third Age, Orophin, Rumil, and Haldir came across the Fellowship on the borders of Lothlorien.  The brothers led the Fellowship to Caras Galadhon, the city of Lothlorien in which the Lord Celeborn and Lady Galadriel lived.  On the night of January 15, the Fellowship slept on a flet.  Meanwhile, Orcs could be heard in the outskirts of Lothlorien.  Orophin, Haldir, and Rumil drove them out, and with haste Orophin told the other Elves of Lothlorien about the presense of the Orcs.  Orophin's ultimate fate remains unknown.  He and his brothers probably went to the Undying Lands in the West with their people after the War of the Ring.

The Lord of the Rings, The Fellowship of the Ring: "Lothlorien," pages 357, 360
The History of Middle-earth, Volume V, The Lost Road and Other Writings: "The Etymologies"
All Pages Copyright © 2010, The Middle-Earth Encyclopedia