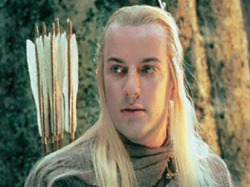 Craig Parker as Haldir in the New Line film
Haldir was an Elf-warrior of Lothlorien.  His origins and parentage are unknown, but it is known that he had two brothers named Orophin and Rumil.  Haldir and his brothers were wardens at Lothlorien's borders, and they were instrumental in the protection of Caras Galadhon, the city of Lothlorien.  Haldir left Lothlorien frequently seeking information concerning the movements of enemy forces.
On January 15, 3019 of the Third Age, Haldir was guarding the borders of Lothlorien when he encountered the Fellowship of the Ring.  Haldir knew that they were not dangerous because he recognized Legolas as an Elf of Mirkwood and he recognized Aragorn as an ally to the Elves and a friend to Galadriel.  Haldir was hesitant to lead the Fellowship to the city of Lothlorien because one member of the Fellowship was a Dwarf named Gimli, and Elves had a long and very ancient distrust of Dwarves.  Haldir agreed to lead the Fellowship into the city of Lorien so long as Gimli was blindfolded.  Gimli was insulted, but the other members of the Fellowship convinced him to wear the blindfold so they could continue their quest.
On the night of January 15, Haldir and the Fellowship spent the night on a flet.  During the night, Haldir heard Orcs nearby.  He and his brothers fought off the Orcs and tried to drive their attention away from the Fellowship.  When Haldir returned to the tree in which the Fellowship slept, he saw a strange creature at the base of the tree.  Frodo Baggins later speculated that this creature was Gollum.
In the morning of January 16, Haldir led the Fellowship across the Silverlode using a rope bridge.  He informed them that Gimli would have to walk through the forest blindfolded.  All of the Fellowship members agreed to go blindfolded as well, for they felt it would be unfair if Gimli was the only member who could not see the woods of Lorien.  Haldir remarked that one would know that there was trouble when the enemies of the Dark Lord were still fighting amongst themselves.
When talking to the members of the Fellowship, Haldir found out from Merry that the Grey Havens, a haven from which the Elves would leave Middle-Earth forever, was located just west of the Shire.  Haldir told the Fellowship of his desire to cross the Sea, but he also told them how he would hate to leave Lothlorien forever.
Word soon came from Caras Galadhon that the Fellowship could all roam Lothlorien without blindfolds.  Haldir apologized to Gimli for suspecting him, and Gimli became the first Dwarf to walk freely through Lothlorien since the days of Durin I.
Haldir guided the Fellowship to Silverlode, and they had boats that they would use to cross the river into Caras Galadhon.  Haldir left the Fellowship there, and he returned to his duties guarding the northern border of Lothlorien.
The rest of Haldir's actions during the War of the Ring are not known.  He probably helped to defend Lorien when it was attacked by the forces of Dol Guldur three times in March of 3019.  Haldir may have been a part of Celeborn's army that crossed the Anduin to capture Dol Guldur and eliminated evil from Mirkwood.  If he survived the War of the Ring, it is likely that Haldir passed over the Sea into the Undying Lands with many of his people.

Notice: In Peter Jackson's film version of The Lord of the Rings, Haldir led a force of Elves to aid the Rohirrim in the Battle of Helm's Deep.  Haldir and many of his Elven warriors were killed in battle.  Nothing of this sort happened in the canonical works of J.R.R. Tolkien.

Haldir means "hidden hero" from hal meaning "hidden" and dir meaning man (and indicating "hero").   Haldir was also the name of a man of the Edain in the First Age, but his name meant something different in his own language.

The Lord of the Rings, The Fellowship of the Ring: "Lothlorien," passim; "The Mirror of Galadriel," pages 368-374; "Farewell to Lorien," pages 386-388
The Lord of the Rings, Appendix B: "The Tale of Years," page 375
The History of Middle-earth, Volume V, The Lost Road and Other Writings: "The Etymologies"
All Pages Copyright © 2010, The Middle-Earth Encyclopedia