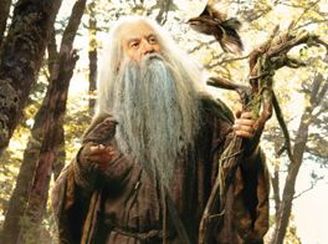 John Harding as Radagast in a Decipher Card designed by Weta
Lover of birds and beasts.  Radagast the Brown was an Istari Wizard sent to Middle-Earth from the far west to oppose the growing power of Sauron.  He was very closely associated with nature.
Radagast was originally a Maia - of High Servant of the Valar - named Aiwendel.  He was selected by Yavanna - the Vala of growing things - to join the quest to Middle-Earth, in which the Istari Wizards would travel to Middle-Earth to help the peoples there oppose Sauron.  The Istari passed over the Sea and reached Middle-Earth in circa 1000 of the Third Age.
Radagast made his home Rhosgobel on the western border of Mirkwood.  He became friendly with Beorn, a mysterious skin-changer from the forest.  Beorn lived near Carrock in northern Mirkwood, and Radagast spent some time with him and he understood the shapes and changes that Beorn could perform.  Despite having been sent to Middle-Earth to help its people oppose Sauron, Radagast had little interaction with Elves or men.  Most of Radagast's friends were birds and beasts.  He could speak to animals very well, and he learned the lore of animals and plants.  Radagast was particularly friendly with birds, but he had a good relationship with other plants and animals as well.
In summer of 3018 of the Third Age, Radagast encountered Saruman, another Istari and the head of the Order of Wizards.  Saruman told Radagast to tell Gandalf that the Nazgul was seeking the Shire and the One Ring, and if he wanted counsel Gandalf should visit Saruman at his home in Isengard.  Radagast did so when he encountered Gandalf at Midsummer on the Greenway near Bree.  But Radagast was fooled because Saruman planned to turn against the free peoples and side with Sauron, and he wished to trap Gandalf.  Gandalf told Radagast to tell all of his animal friends in the woods to look for signs of evil or danger and report them to Isengard.
As it happened, Gandalf was imprisoned in Orthanc but he eventually escaped because Radagast told the Great Eagles to look out for signs of the enemy and report them to Isengard.  When Gwaihir, Lord of Eagles, arrived in Isengard, he found Gandalf imprisoned there and he rescued him.
Radagast's ultimate fate is not known.  Though it would appear that Radagast's love of nature helped Gandalf and was also environmentally friendly, Radagast seems to have forgotten or rejected his original mission to assist the peoples of Middle-Earth in their opposition of Sauron.  At the end of the Third Age, only Gandalf had successfully completed his task, and only Gandalf was allowed to return to the Undying Lands.  It is possible that Radagast lived eternally along side his animal friends, and he may have beneficial to the wildlife of Middle-Earth because he kept it safe.  His fate is not known.

Sylvester McCoy as Radagast the Brown in The Hobbit movie

Radagast tending to his animals in The Hobbit movie

In The Unfinished Tales: "The Istari," is says that Radagast means "tender of beasts" in the language of the men of Numenor.  But Tolkien himself said that this was not the case, and that in fact Radagast's name was in the language of the men of the Anduin and its meaning cannot be interpreted because nothing is known about that language.  But the word Radagast has some similarities to words or phrases of languages in our own world.  In Old English, Radagast could be split into rudu meaning "reddish" and gast meaning "ghost" or "spirit."  In Slavic mythology, the god of travelers' name was Radagast, and his name was from the Old Slavonic words raditi meaning "take care" and gost meaning "guest."  Radagast's name as a Maia of the far west was Aiwendil, which is Quenya for "friend of birds" from aiwe meaning "birds" and ndil meaning "friend."

The Hobbit: "Queer Lodgings," page 129
The Lord of the Rings, The Fellowship of the Ring: "The Council of Elrond," pages 269- 274
The Unfinished Tales: "The Istari," pages 389-401 and passim
The History of Middle-earth, Volume V, The Lost Road and Other Writings: "The Etymologies"
Letters of J.R.R. Tolkien: Letter #156
The Encyclopedia of Arda
All Pages Copyright © 2010, The Middle-Earth Encyclopedia