The Unfinished Tales: "The Istari," passim; "The Quest of Erebor"

The Silmarillion: "Valaquenta: Account of the Valar and Maiar According to the Lore of the Eldar"

Ancient Times (1000s of years before the First Age)
Olorin lived in Valinor and became friendly with Valar and Elves.  He was selected to go to Middle-Earth.

Circa year 1000 of the Third Age
Gandalf and the other Istari reached Middle-Earth.  Cirdan gave Gandalf the Ring Narya.

1100
The White Council realized that there was evil that took base in Dol Guldur in Mirkwood.

2060
The White Council worried that the evil presence could have been Sauron.

2063
Gandalf took action and rushed to Dol Guldur to find that Sauron hid in the east.

2463
The White Council was officially formed.


2758
Gandalf went to the Shire to help the Hobbits survive the Long Winter.

2850
When Gandalf went to Dol Guldur, he learned that the evil presence was indeed Sauron.  From one of Sauron's prisoners, Thrain, Gandalf received the key and map of the Lonely Mountain.

2851
When the White Council met, Gandalf encouraged the members to attack Dol Guldur, but Saruman convinced them not to.

2941
March 15: Gandalf and Thorin Oakenshield, son of Thrain, met at Bree and they decided to reclaim the Lonely Mountain from the dragon Smaug.
April 25: Gandalf went to Bag End in the Shire attempting to interest Bilbo Baggins in the quest.  He failed, and Bilbo stubbornly refused.
April 26: Gandalf brought the party of Dwarves to Bag End.  Bilbo finally joined.
April 27: Bilbo and Gandalf set out with Dwarves for the Lonely Mountain.
May:  After tricking some Trolls and turning them into stone, Gandalf received the sword Glamdring.
June: The company camped in Rivendell with Elrond.
Mid-Summer: Gandalf saved the Dwarves from the Goblins and chopped off the Great Goblin's head.  Bilbo became lost in the caves before reuniting with Gandalf.
Later Summer: Gandalf left the company on the borders of Mirkwood.  He rushed to meet the White Council and they attacked Dol Guldur.  Sauron fled.
Fall: Gandalf found that there was quarreling over jewels at the Lonely Mountain and heard that Goblins were coming.  He united the Men, Elves, and Dwarves in the Battle of Five Armies.

2942
Early: Sauron took base in Mordor.
May 1:  Gandalf and Bilbo reached Rivendell.
June 22: Gandalf got Bilbo home to the Shire successfully.

2944
Gollum came out of the Misty Mountains.  Gandalf continued to track him.

2951
Gandalf lost track of Gollum's trail when the creature turned toward Mordor.  It had been recently revealed that Sauron was living there.

2953
The White Council met yet again and Saruman said that the One Ring was lost in the depths forever.

2956
Gandalf and Aragorn met for the first time.  They became great friends.

3001
September 22: Gandalf attended Bilbo's Farewell Party in the Shire.
Later Fall: Gandalf suspected that Bilbo's Ring might be the One Ring of Sauron.  He and Aragorn decided to continue hunting for Gollum.

3017
Gandalf went to Minas Tirith and found the scroll engraved upon the One Ring by Isildur.

3018
March 23: Gandalf found out the Gollum had had the Ring and hunted for him in Mirkwood.  He found him.
March 29: Gandalf headed for the Shire.
April 12: Gandalf reached Bag End.
April 13: Gandalf revealed to Frodo that the Ring he possessed was indeed the One Ring of Sauron.  The Hobbit offered to take it far away.
Mid-year's: Gandalf saw Radagast in Bree-land.  Radagast informed him of the nearby Nazgul.  Gandalf was told to meet Saruman and warn Frodo.
July 10: Saruman revealed himself to be a traitor and imprisoned Gandalf in Orthanc.
September 18: Gwaihir the Windlord saves Gandalf from Orthanc.
September 20: At Edoras, Gandalf was told by Theoden to leave with any horse.
September 21: Gandalf met Shadowfax.
September 23: Gandalf tamed Shadowfax.
September 29: Gandalf was told by Gaffer that Frodo departed from the Shire with companions.
October 3: Gandalf battled the Nazgul on Weathertop and escaped the next morning.
October 18: Gandalf reached Rivendell.
October 20: Frodo arrived at Rivendell and Gandalf helped Elrond defeat the Nazgul.
October 25: The Council of Elrond met.  Gandalf advised the members that the Ring must be destroyed in Mordor.
December 25: The Fellowship left Rivendell with the Ring.  They headed south.

3019
January 13: The Fellowship entered Moria after realizing it was their only choice.
January 15: Gandalf and the Balrog fell off the Bridge of Khazad-dum.
January 23: Gandalf and the Balrog fought to the top of the Silvertine in the Battle of the Peak.
January 25: Gandalf was victorious.  Though he died, Eru granted him his life back.
February 17: Gwaihir saved Gandalf from the peak and brought him to Lothlorien.
February 20: Gandalf left Lothlorien and headed south.
February 25: Gandalf reached Fangorn Forrest.
February 26: Gandalf mentally save Frodo at Amon Hen.
March 1: Gandalf reunited with Aragorn, Legolas and Gimli in Fangorn.  He rode swiftly on Shadowfax to Edoras.
March 2: Gandalf and his companions reached Edoras where Gandalf freed Theoden of Saruman's hold.  He then encouraged war with Saruman.
March 3: Gandalf gathered an army of Rohirrim and Ents to help fight off the armies of Isengard.
March 4: Gandalf, Erkenbrand, and their armies arrived at the Battle of Helm's Deep.
March 5: At Isengard, Gandalf removed Saruman's staff and banished him out of the Order of Wizards.  Pippin looked into the palantir, as did Aragorn.  Gandalf and Pippin hastily rode to Minas Tirith.
March 9: Gandalf and Pippin reached Minas Tirith to find and stubborn Steward, Denethor II.
March 10: After rescuing Faramir, Gandalf waas told that Frodo and sam were heading to Mordor with Gollum as their guide.
March 14: The Siege of Gondor occurred. Gandalf headed the defense since Denethor had become deranged.
March 15: At the Battle of Pelennor Fields, Gandalf met the With-King head on at the Great Gates of Minas Tirith, but retreated to save Faramir from Denethor's madness.  Denethor committed suicide.
March 16: Gandalf realized that Frodo needed time to destroy the One Ring.  To distract Sauron, Gandalf decided Gondor and Rohan must unite against Mordor at the Black Gate.
March 18: The armies of the West reached the Black Gate.
March 25: The Mouth of Sauron came forth to encourage surrender, but Gandalf  stood and fought.  The Western forces succeeded in their goal to give Frodo time, and the Ring was destroyed and Sauron defeated.
May 1: Gandalf crowned Aragorn High King of Gondor and Arnor in Minas Tirith.
October 30: Gandalf took his leave of Frodo and his companions and visited Tom Bombadil.

September 29, 3021
Gandalf left Middle-Earth with the Elves, Frodo, and Bilbo.  They passed over the sea to the Undying Lands.

Gandalf:
Gandalf means "staff elf" in a language of men.  It referes to the wooden staff he carried.  The name Gandalf also appears in an Old Norse poem called Voluspa.
Grey:  Gandalf first wore grey robes and was known for the color.
White:  Gandalf was reborn as Gandalf the White on the peak of Silvertine.  Saruman became colorless.

Olórin:
Gandalf was first known as Olórin as a Maia in Aman.  Olor and olos mean "vision" in High-Elven.

Grey Messenger/Pilgrim/Wanderer:
Gandalf was called the Grey (name) because he wore grey.  Pilgrim and wanderer imply that he had no home and was a traveller.  He was called Messenger when he arrived in Middle-Earth because he was a messenger of the Valar.

Mithrandir:
Mithrandir is the Elvish word for Grey Pilgrim or Grey Wanderer.  It refers to the fact that the wizard travels  with no fixed dwelling.

Incánus:
Incánus was the name for Gandalf in the south.  It means "north spy" in Haradrim.  It is also a Quenya word used by the people of Gondor, derived from in meaning "mind" and cánu meaning "leader" or "ruler," literally translating to "mind leader" or "mind ruler."
In Latin, incánus translates as "grey haired."

Greyhame:
Gandalf was called Greyhame by Eomer in reference to his grey coat.  The word is derived from the Old English grég or graég meaning "grey" and hama meaning "coat" or "clothes."

The White Rider:
In contrast to the wicked black riders, or Nazgul, Gandalf was called the White Rider by Aragorn and the Gondorians.  He was their symbol for hope and peace.

Láthspell:
Gandalf was called Láthspell by Grima Wormtongue, who feared him.  Láthspell means "ill news" in Old English.  It is derived from láð meaning "bad" or "evil" and spell meaning "story" or "news."

Grey Fool:
As an insult, Denethor referenced Gandalf as the Grey Fool. 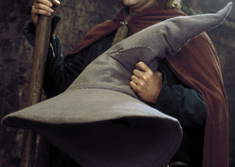 The top two images are of Ian McKellen playing Gandalf in the New Line Cinema film Trilogy of the Lord of the Rings directed by Peter Jackson.
The painting on the mid-left is of Gandalf riding Shadowfax by artist Ted Nasmith.  The mid-right painting is of Gandalf in the Shire by artist John Howe.
The image at the very bottom is a Decipher Card image of Gandalf the Grey's hat.
All Pages Copyright © 2010, The Middle-Earth Encyclopedia