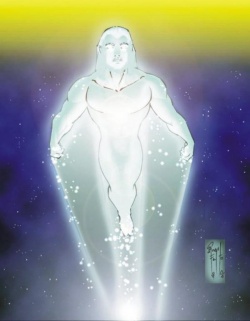 Tilion guides the moon by Angel Falto
Maia who guided the moon.  Tilion was once a member of Orome's hunting group when he lived in Valinor during the Years of the Trees.  Though he spent much of his time with Orome, he spent more time by himself in Lorien in the light of Telperion.  He loved silver and used a silver bow and a silver quiver of arrows.  When the vessels of the sun and moon were created after the destruction of the Two Trees, Tilion begged to guide the moon.  The Valar allowed for Tilion to guide the moon, though he sometimes brought the moon up during the day, and did not even bother showing the moon at night.  He was not as powerful as Arien, and he often guided the moon too close to her rays and would get burnt slightly.
When he discovered the existence of the moon, Morgoth sent mysterious servants called spirits of shadows to the moon, but Tilion was able to vanquish them in Ilmen, and part of Arda's early atmosphere.

Tilion was also called the Man on the Moon, and he inspired both Elven and Hobbitish folklore about a mysterious "man on the moon" to develop.  In an earlier version of the legendarium, there was an Ainu named Silmo who guarded Telperion.  Christopher Tolkien suggests that this character probably developed into Tilion in later versions.

The Silmarillion: "Of the Sun and Moon and the Hiding of Valinor," passim
All Pages Copyright © 2010, The Middle-Earth Encyclopedia