"Words, Phrases and Passages in Various Tongues in The Lord of the Rings," in Parma Eldalamberon XVII (edited by Christopher Gilson), page 115

The Children of Húrin: "The Childhood of Túrin," page 42; "The Words of Húrin and Morgoth," passim

Notice: Chronology for the Years of the Lamps and the Years of the Trees is difficult because these periods of time were measured in Valian Years, and there are approximately 9.582 solar years in a Valian year.

Beginning of Existence:
Melkor was created by Eru Iluvatar himself.  Melkor lived in a Void that existed before the creation of the material universe.  Melkor began to resent Eru because he was alone, and he searched in vain for the Flame Imperishable, the Secret Fire.

Beginning of Time:
The Music of the Ainur created the material universe, Ea.  Eru led the Music of the Ainur.  Melkor wove strange songs into the Music and his song warred with the Theme of Iluvatar.  Eventually, Iluvatar's theme overran Melkor's song, but Melkor resented Eru because of this.

Beginning of Arda (Circa Year 1 of the years of the Lamps):
Eru allowed Melkor to enter the new world of Arda.

Spring of Arda (Years of the Lamps):
Melkor disrupted the Spring of Arda by causing animals to turn on each other and plants to die.

Circa Year 1500 of the Years of the Lamps:
Tulkas entered Arda and Melkor fled from him.  Melkor spent many years in the furthest reaches of the universe.

Circa Year 3500 of the Years of the Lamps:
Melkor returned to Arda and destructed the two lamps that lit the earth, Illuin and Ormal, in order to attack the Valar and sink Almaren during the turmoil.  Melkor was successful.

Early Years of the Trees:
The Valar raised two trees to replace the two lamps.  Melkor began establishing his own realm in northern Middle-Earth.  He raised the towers of Utumno and Angband where he began creating evil creatures to serve him.

Circa 1100 of the Years of the Trees:
When the Elves awoke in Middle-Earth, the Valar captured Melkor and imprisoned him in the Halls of Mandos in Aman in a conflict known as the Battle of the Powers.  Melkor's servant Sauron evaded capture.

Circa 1490s of the Years of the Trees:
After three ages, Melkor convinced Manwe to release him from prison, but Melkor was required to remain in the city of Valmar under close watch.  Melkor began causing the Noldorin Elves to doubt the Valar through a series of murmurs, and the Valar discovered this but Melkor escaped during the confusion.  Melkor was banished from Formenos by Feanor of the Noldor and he went south to find Ungoliant, a mysterious Great Spider.  Melkor and Ungoliant attacked Formenos and seized the Silmarils and other jewels, and they cut the Two Trees and escaped to Middle-Earth during the confusion.  Ungoliant turned on Melkor once they reached Middle-Earth, and he gave her all of Feanor's jewels but the Silmarils.  Melkor's servants rescued him when they heard Ungoliant torturing him, and Melkor thus kept the three Silmarils.

Circa 1498 of the Years of the Trees:
Morgoth attacked the Noldor in a conflict known as the Battle-under-Stars.  The Noldor were victorious but Feanor was killed.

Circa 1500 of the Years of the Trees:
The Sun and Moon rose for the first time as a group of Noldor arrived in far northern Beleriand via the Grinding Ice.

Year 1 of the First Age:
Men awoke in Hildorien.

75:
Glorious Battle.  The Noldor were victorious against the forces of Morgoth and the Siege of Angband began.  From inside of Angband, Morgoth built his strength and continued to develop evil schemes.

455:
Morgoth gathered his strength and broke the siege of Angband.  He sent rivers of fire from Angband and into Dorthonion.  He then sent forth great and terrible forces of Orcs, Balrogs, and dragons.  Ultimately, Morgoth was victorious in battle and his forces overran northern Beleriand, and they occupied lands throughout Beleriand.

460:
Barahir and his outlaw band were massacred at Tarn Aeluin.

463:
Easterlings under the command of Ulfang joined the Union of Maedhros.  In time, Ulfang's Easterlings would be deceived and would join with Morgoth.

464:
Beren and Luthien fell in love.  Turin was born as the son of Hurin.

472:
Battle of Unnumbered Tears.  Morgoth achieved a massive victory over his opponents due to the treachery of Ulfang.  Morgoth's forces captured Hurin and he was imprisoned in Thangorodrim, where Morgoth cursed Hurin's family.

495:
Morgoth furthered his conquest of Beleriand by sacking and destroying Nargothrond.

499:
Hurin's children Turin and Nienor both died due to Morgoth's curse.

502:
Dwarves of Nogrod killed Thingol in order to gain his Silmaril.  Elves and Dwarves continued to battle one another over this conflict.

509:
Maeglin of Gondolin was captured and tortured by the forces of Morgoth.

510:
Morgoth's forces discovered the location of Gondolin from Maeglin, and they invaded the city and it was destroyed.

511:
Refugees from Gondolin including Tuor and Idril arrived in the Havens of Sirion.

534:
Earendil, the son of Tuor and Idril, set out from Middle-Earth in search of Valinor in order to seek aid from the Valar in the war against Morgoth.

540:
After a series of violent conflicts between the Sons of Feanor and the refugees from Gondolin, the Elven race was greatly weakened and Morgoth was able to gain control of the entirety of Beleriand.

542:
Earendil and Elwing arrived in Valinor and the Valar agreed to aid the peoples of Middle-Earth in the war against Morgoth.

543:
Teleri of Alqualonde built great ships to sail the Host of the Valar to Middle-Earth.

545:
The Host of the Valar arrived in Beleriand and engaged Morgoth in the War of Wrath.

587:
Beleriand was destroyed as a result of the War of Wrath.  The Valar were victorious.  Ancalagon the Black and Maedhros were both killed.

590:
The Host of the Valar captured Morgoth in Angband and they cast him out of Arda and into the Void.  Valar departed from Middle-Earth.  End of the First Age.

End of the World:
According to a prophecy made by Mandos, Morgoth found his way back into the world sometime late in its existence, and he was utterly destroyed by a resurrection of Turin after a great war called Dagor Dagorath.

Morgoth:
Morgoth is Sindarin for "Black Foe."  This name was given to him by Feanor after the theft of the Silmarils.  The Quenya equivalent of Morgoth may be Moringotto, Moriñgotho, or Morikotto, all speculations made by Tolkien himself.

Melkor:
Melkor means "mighty arising," from mbelek meaning "might" and oré meaning "rising."  In older drafts of the legenadrium, Melkor was called Melkórë and Melko.  Tolkien also abandoned the names Belcha, Melegor, and Meleko.  The name Melkor was used before he stole the Silmarils; afterwards, Feanor renamed him Morgoth and that name became universal.

Bauglir:
Bauglir is the Sindarin word for "constrainer," and this name was given to Morgoth at the beginning of the First Age when he returned to Angband.  Also called Morgoth Bauglir, translating form Sindarin as "Black Foe the Constrainer."

Belegûr/Belegurth:
Belegûr is Sindarin for "he who arises in might" and Belegurth means "great death."  Morgoth was occasionally called these names by the Sindar.

Black King:
As the lord of all evil, Morgoth was often called the Black King.  He was also called Dark King, Dark Lord, and Lord of the Dark.

Dark Hunter:
Melkor was called Dark Hunter by the Elves before they met Orome the Hunter.

Elder King:
Morgoth called himself the Elder King when he was speaking of himself to Hurin.

Lord of All/Giver of Freedom:
Sauron used these names for Morgoth when he encouraged the people of Numenor to worship Morgoth instead of Eru. 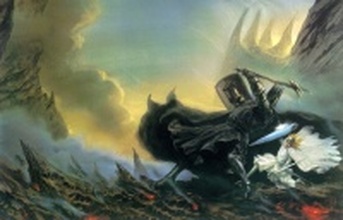 Morgoth vs. Fingolfin, by John Howe
All Pages Copyright © 2010, The Middle-Earth Encyclopedia