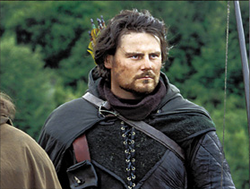 Anborn in the New Line film
Anborn was a Ranger of Ithilien and a member of Faramir's company.  He was the Ranger who told Faramir that Gollum was approaching.
Anborn saw Gollum on March 7, 3019 of the Third Age.  He suspected him to be a large squirrel, but the creature hissed at him, so he became doubtful.  On March 8, Anborn spotted Gollum catching a fish at the Forbidden Pool, a body of water at the base of Henneth Annun.  When Anborn asked if he should kill Gollum, Frodo Baggins told him spare the creature's life because he was his guide for the quest to destroy the One Ring.  Faramir ordered Anborn to accompany Frodo down to Gollum, and Anborn did so through grunts and groans.
When Gollum came to Frodo, Anborn grabbed the creature's neck and put a hood over his head.  Despite Frodo's advise against it, Anborn brought Gollum to Faramir for questioning.  When Faramir was done with Gollum, Anborn took the creature away, given instructions by Faramir to treat him well but keep a keen eye on him.

The meaning of the name Anborn is unknown.  Anborn could possibly come from the Quenya ann meaning "long" and boron meaning "enduring."  This combination could result in something along the lines of "long enduring" or even "steadfast."