“And there was Frodo, pale and worn, and yet himself again; and in his eyes there was peace now, neither strain of will, nor madness, nor any fear. His burden was taken away.” - The Return of the King

The History of Middle-Earth, Volume XII, The Peoples of Middle-earth: pages 48 and 50

2980
Frodo's parents, Drogo and Primula, drowned in the Brandywine River.

2989
Bilbo Baggins took Frodo in to Bag End in Hobbiton.

3001
September 22: Bilbo threw his Farewell Party on he and Frodo's birthday.  After the party, Frodo threw Sancho Proudfoot out of Bag End, for he was snooping.
Later that Month:  Bilbo left the Shire and Frodo owned Bag End.

3018
April 12: Gandalf finally returned to Bag End to warn Frodo about his Ring, which in fact was the One Ring of Sauron.
April 13: Frodo wanted to save the Shire, so decided to take the Ring far away to prevent attackes.
September 23: Frodo left Bag End with Sam Gamgee and Pippin Took.  Bag End was sold to Lobelia Sackville-Baggins.  Frodo bought Crickhollow in Buckland.
September 24: Khamul and several other Nazgul were after Frodo in Woody End.  They were scared off by Gildor Inglorion, who supplied Frodo with food and told him to stay off the road.
September 25: Frodo was housed by Farmer Maggot.  Merry met him in Buckland.  At Crickhollow, Pippin and Merry told Frodo that they planned on coming with him.
September 26: The four Hobbits left the Shire and traveled through the Old Forest where they were attacked by Old Man Willow and saved by Tom Bombadil.  They met him and his wife Goldberry and were housed by them.
September 28: The Hobbits left Tom's house and travelled through the Barrow-downs and were captured by an evil Barrow-Wight.  They were saved by Tom Bombadil and were off to Bree.
September 29: Frodo and his companions arrived at Bree.  They met Aragorn there, who became their guide.
October 6: Frodo and his companions camped at Weathertop.  The Witch-King of Angmar stabbed Frodo with his Morgul Blade.  Aragorn rushed to find Athelas in the Tollshaws but Frodo was still not cured.  He was brought to Rivendell by Glorfindel.
October 20: Frodo and Glorfindel fled from the Nazgul, who missed them by inches.  Gandalf and Elrond drowned their horses in the Ford of Bruinen.  The Nazgul were wounded and retreated to Mordor.
October 23: Elrond removed the Morgul-knife from Frodo's shoulder.
October 24: Frodo awoke with Gandalf at his bedside.  Gandalf explained why he was unable to meet them at Bree.
October 25: The Council of Elrond was held in Rivendell.  Frodo realized that the Ring was his burden, and he must take it to Mordor to be destroyed.  A Fellowship was formed, the nine walkers.  Bilbo gave Frodo Sting and the Mithril Mail.
Next Month: Frodo spent most of his time with Bilbo.
December 25: The Fellowship set out for Mordor.  The Ring went south.

3019
January 13: The Fellowship entered Moria through the West Gate after conflict with the Watcher in the Water.
January 14: The Fellowship continued to travel through the mines.  The creature Gollum picked up their trail.
January 15: Gandalf was lost to the Balrog off the Bridge off Khazad-Dum.
January 17: In Lothlorien, the Fellowship met mighty Elves including Celeborn and Galdadriel.
February 14: Frodo was offered a look into Galadriel's Mirror.  He saw Bilbo, Gandalf the White, the Scouring of the Shire, and Sauron's evil Eye.
February 16: The Fellowship's departure from Lothlorien and their sailing down the Anduin.  Galadriel honored each member with a mighty gift.  To Frodo, she gave a Phial.
February 26: The Fellowship reached Amon Hen, where a skirmish with Uruk-Hai occurred.  Boromir attempted to steal the Ring from Frodo, but failed and was killed by the Uruk captain.  Frodo and Sam set out to destroy the Ring alone.
February 29: Frodo and Sam passed through the Emyn Muil, where Gollum attacked in attempt to get the Ring.  Frodo had the opportunity to kill him, but he did not.  Gollum swore to bring the Hobbits safely to the Black Gate.
March 1: Gollum led the Hobbits through the secret Dead Marshes.  The dead faces had evil lights wich Frodo followed.  He fell in and was attacked by the Dead in the Marshes.  Gollum saved him.  Nazgul swooped overhead.
March 5: They reached the Black Gate and witnessed an army of Easterlings passing by.  They realized that they could not pass and Gollum offered to take them through a secret way into Mordor.
March 7: After seeing an Oliphaunt ridden by Haradrim get shot down, the Hobbits were caught by a host of Rangers led by Faramir.
March 8: Frodo and his companions were released from Henneth Annun.
March 10: The Hobbits passed by Minas Morgul and witnessed and army passing led by the Witch-King.
March 11:  The Hobbits climbed the Stairs of Cirith Ungol.  Gollum threw away their Lembas Bread.
March 12: The Hobbits entered Shelob's Lair.
March 13: Frodo was paralyzed by Shelob and he was taken by Shagrat and Gorbag to the Tower of Cirith Ungol, where he was prisoner.
March 14: Sam followed Frodo and climbed the Tower of Cirith Ungol, killing Orcs as he went.
March 15: Sam gave the Ring back to Frodo and the two Hobbits left Cirith Ungol.
March 18:  Frodo and Sam, all dressed in Orc armor, were whipped into a line of Orcs.
March 19: After an inspection, the two Hobbits left the line and continued across the plains of Gorgorath.
March 20-24: Frodo and Sam continued to Mount Doom.
March 25:  Frodo was unable to destroy the Ring once in the Chamber of Fire.  Gollum fought with him and bit his finger off, which had the Ring on it.  Frodo then pushed him and the Ring into the lava of Mount Doom and it erupted.  The Ring was destroyed and Sauron died.  Frodo and Sam were saved by Gwaihir.
April: Frodo reunited with the Fellowship.  Frodo and Sam were bowed to and respected by others, including at the Field of Cormallen.
May 1: Frodo brought forth the Crown of Gondor on lebethron wood before King Aragorn.  Arwen presented him with a white jewel.
October 30: Frodo, Sam, Pippin, and Merry returned to the Shire at the Brandywine Bridge.  They were astonished to find it in ruin.  He was also astonished that Lotho Sackville-Baggins had taken over, but saddened to find him dead.  The real Chief was Saruman.
November 3: The Hobbits armed their forces and rebelled against the invading Ruffians in the Battle of Bywater.  Saruman was killed by Grima Wormtongue, who was killed by a Hobbit arrow.  Frodo was elected Mayor that month, and he resigned when Will Whitfoot was ready to take office again.

Frodo had many names and was referenced many times in the tale.  The following were all known references to him:

Frodo:
Fród means "wise" in Old English.
The ending O suggests that a name is for a male.

Mr. Underhill:
Frodo used this as a code name in Bree.
It literally means "Under the Hill."

Ring-Bearer:
Frodo was the bearer of the One Ring.

He was called this by many, including Gandalf, Saruman, and Denethor.
To be the bearer of something is to own it, or to carry it or hold it.

The Hobbit/ The Halfling:
Frodo was called this by people who knew him little.  He was also the only Hobbit that crossed into many people's paths.

Halfling is a word meaning Hobbit.  This implies that Hobbits are half the size of men.

Iorhael:
Iorhael means Frodo in Sindarin.
He was called this on the Field of Cormallen.

Daur:
On the Field of Cormallen, Frodo and Sam are both called Daur, which is the Sindarin name for Noble.

Maura Labingi:
The Hobbitish name for Frodo Baggins.  While Hobbitish was extinct, some words were still used.

Elijah Wood portrays Frodo in the New Line Cinema film Trilogy of The Lord of the Rings directed by Peter Jackson.
The painting is of Frodo by artist Alan Lee.

Frodo's branch of the Baggins Family: 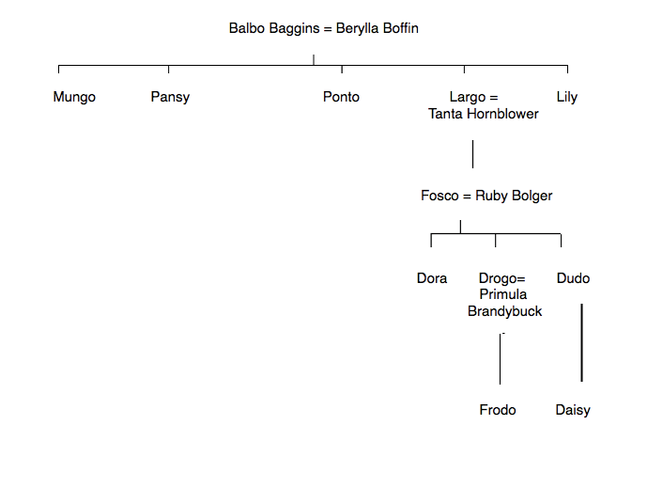