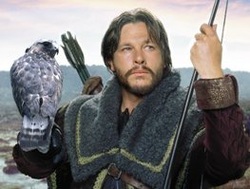 Decipher Card of Brand
Grandson of Bard the Bowman; King of Dale.  Brand ruled the kingdom of Dale at the time of the War of the Ring.  Brand was the son of King Bain.  Brand was born sometime in the late Third Age.  In 3007 of the Third Age, Bain died and Brand became King of Dale.
In the early years of Brand's reign, Dale was at its height.  The kingdom passed southeast of Lake-town and to the foot of the Lonely Mountain, where the kingdom's allies the Dwarves lived.  The people of Dale often traded with the Dwarves of the Lonely Mountain via the River Running.
Dale's shining days of glory did not survive the War of the Ring.  In circa 3017, a messenger from Mordor arrived in Dale.  This messenger sought news of Bilbo Baggins and his Ring.  Though Brand told the messenger nothing, he greatly feared that Dale was at stake, and was vulnerable to an attack by Sauron.  As the months passed, more messengers arrived in Dale, and some went to the Lonely Mountain as well, all seeking news of the Ring.
Brand was the King of Dale during the War of the Ring.  In March of 3019, Easterlings from Rhun crossed the Redwater into Dale.  The mission of these Easterlings was to conquer Dale on behalf of Sauron.  Brand sought aid from the Dwarf Lord Dain Ironfoot who ruled the Lonely Mountain.  Men and Dwarves fought side by side in the Battle of Dale.  The battle was a gruesome one that lasted three full days.  Brand was killed on March 17, 3019.  Dain Ironfoot stood alone, honoring Brand's life, until he himself was slain by the enemy forces.  The Dwarves and Dalemen retreated into the Lonely Mountain, not leaving until news spread of Sauron's defeat in the south.  With renewed strength, the Dalemen and Dwarves broke the Easterlings' siege of the Lonely Mountain and drove them out of Dale.
After Brand's death, his son Bard II succeeded him as king.

The word Brand comes from Brandr.  In Old Norse, it means "sword," possibly referencing the warlike spirit of this king.