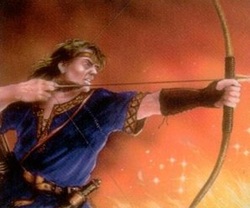 Bard the Bowman by Angelo Montanini
Hero of Lake-town; King of Dale.  Bard the Bowman was a descendant of Lord Girion.  In 2770 of the Third Age, the dragon Smaug ruined Dale and took over the Lonely Mountain, which he made his lair.  Bard was born sometime in the late Third Age.
Bard was a young bowman in 2941, the year in which Smaug attacked Lake-town.  For the city's defense, Bard led a company of archers to fire at Smaug. When the dragon emerged from the Lonely Mountain in autumn of 2941, the Raven thrush informed Bard where Smaug's armor was week.  Bard was able to pierce Smaug's underbelly with the Black Arrow.  Smaug fell and destroyed the Lake-Town of Esgorath.
Bard swam to Dale, where the people begged him to be king.  He refused, for he served as the lead Bowman to the Master of Lake-town.  Bard requested aid from Thranduil of Mirkwood.  The Elves of Mirkwood and men of Dale marched upon the Lonely Mountain, where Thorin and Company were distributing Smaug's hoard of riches.  The Dwarf Thorin Oakenshield was enraged that Smaug's riches would have to be shared, and he refused to negotiate.  The Dalemen and the Wood-elves were enraged, and Thorin contacted Dain Ironfoot to lead an army to defend the Dwarves and their riches.  At the same time, Mountain Orcs with their legion of Wargs led a great force to attack.  The Elves, men, and Dwarves were forced to join forces against the invasion in the Battle of Five Armies.  The Orcs and Wargs were defeated, but Thorin was killed.  Bard lay the Arkenstone upon the Dwarf's breast at his burial.
After the battle, the Dwarves agreed to let Bard and his people take some of the gold.  The Dalemen were able to rebuild Dale and Esgorath, and they became a wealthy kingdom.
In 2944, Bard became king of Dale and Esgorath, and rebuilt the marvelous city.  They continued friendly trade with the Dwarves of the Lonely Mountain.  In 2977, Bard died and was succeeded as king by his son Bain. 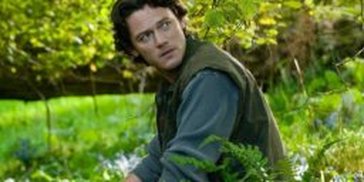 Luke Evans as Bard in The Hobbit movie

The name Bard can be derived from the Old Norse name Bárðr, which comes from böð, the Old Norse word for "battle."  This may be a reference to Bard's warlike spirit.