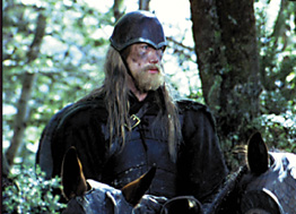 Ceorl was an elderly knight who served Rohan during the War of the Ring at the end of the Third Age.
After the Rohirrim lost the Second Battle of the Fords of Isen in February of 3019, Erkenbrand led an army to take refuge at Helm's Deep.  Ceorl was sent by Erkenbrand to warn Eomer of the loss at Isen.  To his surprise, he came across the army of King Theoden.  Ceorl's ill news caused Theoden to rethink his battle strategy.  Instead of riding to the fords of Isen, Theoden's army rode to Helm's Deep where they would soon engage the enemy in the Battle of Helm's Deep.

The name Ceorl comes the Old English word for "lowest rank," indicating that Ceorl or possibly his family were among the lowest rank of free peoples in Rohan.

The Lord of the Rings, The Two Towers: "Helm's Deep" page 132
The Unfinished Tales: "The Battles of the Fords of Isen"
All Pages Copyright © 2010, The Middle-Earth Encyclopedia