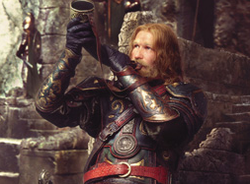 Decipher Card of Erkenbrand designed by Weta
Lord of the Westfold of Rohan during the War of the Ring.  Erkenbrand was born sometime in the late Third Age.  He bore a red shield and black horn.
Erkenbrand presumably inherited the title of Lord of the Westfold from his father.  In his early years, Erkenbrand was a skilled and courageous knight serving the King of Rohan.  He settled in the Hornburg at the time of the War of the Ring.
As the threat from Isengard grew, Erkenbrand strengthened the Horburg's defenses.  When the King's son Theodred was killed on February 25, 3019 of the Third Age in the First Battle of the Fords of Isen, Erkenbrand assumed command of the Westfold.  He sent word for back-up in the First Battle of the Fords of Isen, but Grima delayed the message.
Erkenbrand eventually rode back to the Fords of Isen to take part in the Second Battle of the Fords of Isen with Elfhelm and Grimbold.  He rallied one thousand riders in preparation for the battle.  On March 2, Saruman's forces drove Erkenbrand's east, and they were met by Gandalf who told them to ride to the Hornburg with haste to meet Theoden and help him defeat the overwhelming forces of Saruman.  Erkenbrand's forces arrived on March 4 to turn the tides on the Battle of Helm's Deep, and they fought relentlessly until the battle was won.
Later that month, many Rohirrim rode to aid Gondor in the Battle of the Pelennor Fields.  Erkenbrand stayed behind to guard Edoras while King Theoden was at war.
When Eomer became King of the Mark after the War of the Ring, Erkenbrand was named Marshal of the West-Mark.

The exact meaning of the name Erkenbrand remains disputed.  However, it could be derived from the Old English words eorcan, which means "precious," and brand, which means "torch," possibly resulting in something like "precious flame."