The Lord of the Rings: A Reader's Companion by Wayne G. Hammond and Christina Scull, pages 229, 367

Year 2991 of the Third Age
Eomer was born to Eomund and Theodwyn.

3002
Eomer and his sister, Eowyn, were orphaned.  Their uncle, King Theoden, kindly took them into his care and raised them as though they were his own children.
3017
Eomer was named Third Marshal of the Mark by Theoden.

3018
September 20: Gandalf visited Theoden in order to warn him of the evil of Saruman.  Theoden, who had fallen under the influence of Saruman through Wormtongue, told him to take any horse and go.

3019
February 25: First Battle of the Fords of Isen. Theoden's son Theodred was killed.
February 26: It came to Eomer's knowledge that Orcs were passing through Rohan and feared an alliance between Saruman and Sauron.  Eomer asks the King for permission to pursue the Orcs, but Theoden
February 27: Despite the fact the Theoden did not give him permission, Eomer led his eored to ambush the Orcs in Rohan.
February 28: The eored ambushed the Orcs near the forest of Fangorn.
February 29: Eomer burned the dead Orcs and held a funeral for the Rohirrim who died in the pursuit.
February 30: Eomer met Aragorn, Legolas, and Gimli and gave them two horses.  He then returned to Edoras only to be imprisoned for disobeying the King's orders.
March 2: Eomer was released and learned that Theoden was released from Saruman's influence by Gandalf.  Since Theodred died, Eomer was named the King's heir and they rode to war against Saruman's forces.
March 3: The armies of Rohan reached Helm's Deep only to be attacked by he forces of Saruman.
March 4: The Battle of Helm's Deep resulted in Rohan's victory.
March 5: Eomer, Theoden, Gandalf, Aragorn, Legolas, and Gimli went to Isengard to confront Saruman.
March 6: Eomer and Theoden left for Dunharrow.
March 9: When Eomer and Theoden arrived in Dunharrow, Hirgon of Gondor requested Rohan's aid in war.
March 10: Eomer mustered the Rohirrim.  They departed Dunharrow for Gondor.
March 13: The Rohirrim reached the Druadan Forest.
March 14: Ghan-buri-Ghan, chieftain of the Woses, led the Rohirrim beyond enemy forces.
March 15: The Rohirrim arrived at the Battle of the Pelennor Fields. King Theoden was slain, so Eomer was named King of Rohan. The battle was won.
March 16: Eomer went to a debate in Minas Tirith in which the western commanders decided to march to the Black Gate led by Aragorn.
March 18: The Western Armies were led from Minas Tirith by Aragorn.
March 25: The Armies of the West battled Sauron's forces in the Battle of Morannon until Frodo destroyed the One Ring and Sauron fell, defeated.
April 8: Eomer attended the Western ceremony for their victory on the Field of Cormallen.
May 1: Eomer attended the crowning of King Aragorn.
May 8: Eomer and his sister Eowyn go back to Rohan to clean it of its hardships from the war.
July 18: Eomer returned to Minas Tirith to retrieve Theoden's body.
July 22: Theoden's body was escorted from Gondor to Rohan.
August 10: A funeral was held in Edoras for King Theoden.

3021
Eomer was married to Lothiriel of Gondor.

Year 63 of the Fourth Age:
Eomer died in fall and was succeeded as King by his son Elfwine.

Éomer:
Éomer is of Old English origin.  It comes from eoh, which means "horse," and maére, which translates as  "renowned."  The name Éomer appears in the tale Beowulf. 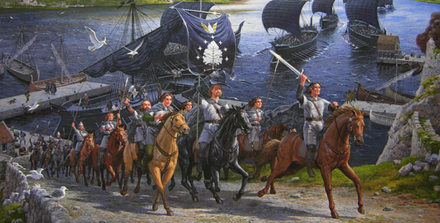