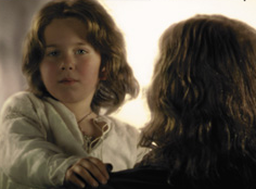 Sadwyn Brophy as Eldarion in the New Line film
Eldarion was the son of Aragorn and Arwen.  He was born sometime in the early Fourth Age.  He became the thirty-fifth King of Gondor.  He was half-elven and half-man.  Though Eldarion had several unnamed siblings, he was the only heir of Aragorn.
In year 120 of the Fourth Age, Eldarion accompanied Aragorn to his death in the House of Kings by the Silent Street.  There, Aragorn passed the kingship of Gondor and Arnor to his son and gave him the Crown of Gondor and the Sceptre of Annuminas.  Arwen left Eldarion after her husband's death and went to Lothlorien where she died later that year.
Eldarion ruled over the reunited kingdom of Gondor and Arnor at least until year 220 of the Fourth Age.  His reign was remembered for at least one hundred generations of men.

Eldarion means "son of the Eldar" in Quenya.  The Eldar were an Elvish people, and their name means "people of the stars."  The suffix -ion is a common Quenya element that translates as "son of."