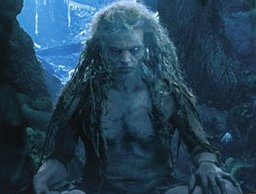 Decipher Card of Ghan-buri-Ghan designed by Weta
Chief of the Druedain at the time of the War of the Ring in the late Third Age.  Ghan-buri-Ghan was the leader of the remnants of a people who called themselves the Drughu.  The Druedain had existed since the First Age, and by the late Third Age they numbered several hundred to a few thousand.  They lived in Druadan Forest in Gondor.  There were several tribes of the Druedain, and Ghan-buri-Ghan was the headman of all of them.
Ghan-buri-Ghan was a short man with a flat, black-skinned face, jetty eyes, and dark hair.  He had a wispy beard and wore nothing more than a grass skirt.  Because they were not very civilized, the Druedain were often called the Wild Men or simply Woses.  Ghan-buri-Ghan could speak both the Common Speech and his own language, though he struggled with the Common Speech.  His voice was very deep.
On March 13, 3019 of the Third Age, King Theoden of Rohan attempted to lead his people through Druadan Forest to aid the people of Gondor in their war against Mordor.  Ghan-buri-Ghan's scouts had reported that Gondor's capital of Minas Tirith was besieged, and Ghan-buri-Ghan passed this information along to Theoden.  He also told Theoden that the enemy forces had taken the Great West Road.  But Ghan-buri-Ghan promised Theoden that he could lead Rohan's knights to war through a secret path through Stonewain Valley and onto the Pelennor Fields.  Theoden thanked Ghan-buri-Ghan for his cooperation and told him that the Druedain should have the friendship of Rohan forever, but Ghan-buri-Ghan said he only wished for the Rohirrim to leave his people alone and to stop hunting them.
Theoden agreed and Ghan-buri-Ghan walked along side him all the way to the Pelennor Fields.  His guides led other eoreds of the Rohirrim.  They reached the eastern side of the Grey Wood by March 14, and there Ghan-buri-Ghan's scouts reported that the enemy forces had destroyed the Rammas Echor and were no longer focused on the possible arrival of the Rohirrim.  Ghan-buri-Ghan then realized his job was done, and he bowed to Theoden and touched his head to the ground.  Ghan-buri-Ghan scampered into the woods, but before disappearing, he said that the wind was changing, implying that hope remained for the West.  He then disappeared into the woods and was never seen by any rider of Rohan again.
As it turned out, the Rohirrim helped the people of Gondor win the Battle of the Pelennor Fields and the wind changed when Aragorn arrived in the Corsair ships.
The free peoples of Middle-Earth ultimately won the War of the Ring and Sauron was destroyed.  After his coronation, the new King Aragorn began setting new laws.  On July 22, he granted the region of Druadan Forest to Ghan-buri-Ghan and his people, and no one was allowed to enter those woods without their consent.

Ghân-buri-Ghân was also called Ghân.  The meaning of his name is not known, and it was likely in the exotic, alien language of the Druedain which was not understood by outsiders.