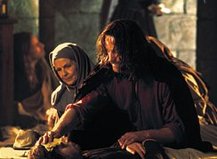 Ioreth - unused image from the New Line film
Nurse of The Houses of Healing in Gondor.  Ioreth was born sometime in the late Third Age.  She came from Imloth Melui in Lossarnach, but moved to Minas Tirith to work in the Houses of Healing during the War of the Ring.  She became one of the wisest women in Gondor.
Though a woman of good intentions, Ioreth was very talkative, a fact which pestered both Aragorn and Gandalf in March of 3019 of the Third Age.  Nevertheless, Ioreth's statement "The hands of the king are the hands of a healer" had provoked Gandalf to bring Aragorn to the Houses of Healing.
Being as old as she was at the time of the War of the Ring, Ioreth had an extensive knowledge of folklore, and she often told her patients tales to keep their spirits up.  She did such to Faramir after his wounds in the Battle of the Pelennor Fields.
Ioreth cried when she learned Faramir had been injured.

The name Ioreth means "old woman" in Sindarin.  It is composed of the elements iaur, meaning "old," and the feminin suffix -eth, indicating "woman."  In a draft of the legendarium, Tolkien called her Yoreth.

The Lord of the Rings, The Return of the King: "The Houses of Healing," passim
"Letter to a Mr. Joukes dated August 28, 1967," published by Wayne G. Hammond and Christina Scull in The Lord of the Rings: A Reader's Companion, page 579
All Pages Copyright © 2010, The Middle-Earth Encyclopedia