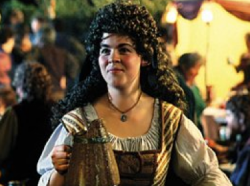 Melilot Brandybuck in the New Line film
Merry young Hobbit-lass of the Shire who attended Bilbo Baggins's Farewell Party in 3001 of the Third Age.  Melilot Brandybuck was born in the year 2985 of the Third Age.  She was the daughter of Marmadas Brandybuck.  Melilot had an older brother named Merimas and an older sister named Mentha.
Melilot and her family attended Bilbo's Farewell Party on September 22, 3001 in Hobbiton.  When Bilbo Baggins was in the middle of his speech, she another Hobbit, Everard Took, thought the speech was over and began dancing the Springle-ring on a table.  They were embarrassed to find that Bilbo had not completed his speech and was annoyed by the interruption.
Melilot's fate after the party in 3001 is not known.

Melilot is the name of a clover with whitish flowers.  Like many Hobbit-lasses, Melilot Brandybuck was named after a plant.