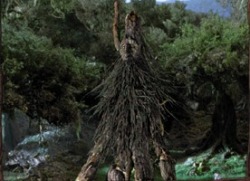 Skinmbark in the New Line film
One of the three eldest of Ents at the time of the War of the Ring at the end of the Third Age.  Skinbark, Treebeard, and Leaflock were the three eldest of all Ents, and together they formed the remnant of the first Ents ever to live in Middle-Earth.  Skinbark lived with Quickbeam in a region of Fangorn Forest that was located west of Isengard.  This region's geography was very mountainous, and the slopes of the mountains descended into the valley in which Isengard was located.
During the War of the Ring, Saruman sent his Orcs to destroy the region and cut down all of its trees.  After being wounded, Skinbark retreated up the mountain and did not come down.  Quickbeam attended the Entmoot and told the Ents there of Skinbark's wounds and displacement.

Skinbark was named this because of the bark that replaced his skin.  His Elvish name was Fladrif, which translates as "Skinbark," though the etymology is not known.