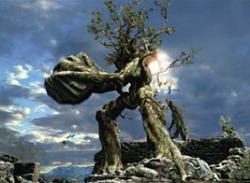 Quickbeam in the New Line film
Supposedly hasty young Ent.  Quickbeam was considered hasty because he drank quickly, answered an elder Ent very quickly once, and quickly decided to march upon Isengard.  Quickbeam lived with Skinbark in a region west of Isengard.  He lived near many rowan trees.
During the War of the Ring at the end of the Third Age, Saruman's forces killed all of the rowan trees and wounded Skinbark and many other Ents in the process.  Quickbeam moved deeper into Fangorn Forest, fearing that Saruman's Uruk-Hai would return.  Skinbark, too, relocated, but he moved to high mountain slopes at the top of Fangorn.  Quickbeam came to live in a green area near Derndingle in the forest next to a clean, clear spring with a grassy bank.  Quickbeam's home was surrounded by rowan trees and inside there was a rock covered in moss.
On February 30, 3019 of the Third Age, Quickbeam attended the Entmoot.  He hastily decided to march upon Saruman's stronghold of Isengard and destroy it, and he decided that his mind was made up so he did not need to stay at the Entmoot.  Treebeard took Quickbeam to Merry Brandybuck and Pippin Took, and he watched over them while the Entmoot continued.
The other Ents finally agreed to attack Isengard on March 2.  Quickbeam brought Merry and Pippin with him when he went to war.  Quickbeam fought valiantly against Saruman's forces.  When the Ents arrived at Isengard, Quickbeam saw Saruman and shouted "tree-killer" and pursued him until Saruman locked himself inside Orthanc.  Treebeard released Saruman from Orthanc, and gave Quickbeam the keys of Orthanc, which were later given to Aragorn.  Quickbeam lived in Isengard and helped make it green and beautiful again after the defeat of Saruman.

The name Quickbeam indicates that he was a hasty Ent.  The element beam is Old English for "tree," and "quickbeam" is a British phrase used to reference rowan trees.
Quickbeam's Sindarin name was Bregalad.  The element bregol means "sudden" and galad means "tree."