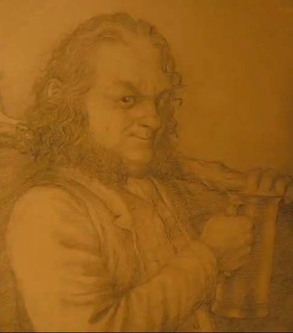 A portrait of Bandobras "Bullroarer" Took in The Hobbit movie
Hobbit who led his army to victory in the Battle of Greenfields.  Bandobras Took was born in 2704 of the Third Age.  He was the son of Isumbras Took III.  Bandobras had a brother named Ferumbras II.  Bandobras was four feet and five inches tall, a remarkably tall height for a Hobbit.  He could ride a horse, and he owned one.
In 2747, a Mountain Orc commander named Golfimbul led a large force of Goblins from Mount Gram.  They attacked the Shire from the north.  Bandobras raised an army of Hobbits and defeated Golfimbul's force in the Northfarthing.  Bandobras charged directly toward Golfimbul with a club, and hit his head so hard that it came off of his body, flew 100 yards, and landed in a rabbit-hole.  This was how golf was invented in Middle-Earth.
Bandobras Took was nicknamed "Bullroarer" in his later years.  He was respected by his people and made a roll-model for the rest of his days.  He died in 2806.  He became an ancestor of many Tooks, and he was an ancestor of the North Tooks of Long Cleeve, including Diamond, through many generations.

Bandobras Took was nicknamed "Bullroarer."  A bullroarer is a wind instrument valued by many indigenous Oceanic peoples such as the Aborigines of Australia.  To Indigenous Australians, a bullroarer has significant spiritual value.
Tolkien may have been inspired by the bullroarer exhibit at the Museum of World Archaeology at Oxford University, where he taught as a professor.