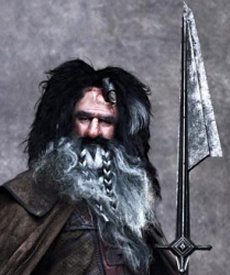 Bifur played by William Kircher in The Hobbit movie
Dwarf of Thorin and Company descended from the Dwarves of Khazad-dum.  Bifur was not of Durin's line.  His cousins were Bofur and Bombur.   Bifur wore a yellow hood.
Bifur and his cousins were selected by Thorin Oakenshield with nine others to join the quest of Erebor.  The goal of the quest was to reclaim the Lonely Mountain and its riches from the dragon Smaug.
On April 26, 2941of the Third Age, Bifur, Bofur, Bombur, Thorin, and the wizard Gandalf arrived at Bag End.  They all fell in when their host Bilbo Baggins opened the door.  Over tea, Bifur aksed Bilbo to make him raspberry jam and apple tart.   Bifur also played his clarinet.
The next day, the Company set out on their quest.  In the Trollshaws, the Dwarves and their companion Bilbo were all captured by three hungry Trolls.  Bifur and Bofur put up strong resistance against the Trolls.  However, it was Gandalf who ultimately rescued the Company.
After Bilbo rescued the Dwarves from the Elvenking's Halls, they floated down the Forest River in barrels.  Bifur was able to stay somewhat dry in his barrel.
When Smaug emerged from the Lonely Mountain in a fit of rage, Bifur rushed to save his vulnerable cousins Bofur and Bombur, who were still outside during the attack.  Luckily for him, Bard the Bowman shot down the dragon before he could kill anyone.
Bifur and his cousins all survived the Battle of Five Armies.  They settled thereafter in the Lonely Mountain.  Bifur was still living at the time of the War of the Ring, and his date of death is unknown.

Bifur is the Old Norse word for "trembler."  His name appears in an Old Norse poem called Voluspa.