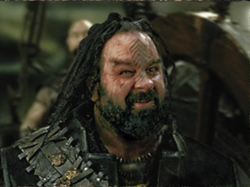 Decipher Card of Castamir
Castamir was a wicked usurper of the throne of Gondor.  He became the twenty-second King of Gondor.  He was born in year 1259 of the Third Age.  His parentage is unknown, but his grandfather was Calimehtar, second son of King Calmacil of Gondor.  Castamir was a truly evil man.
Controversy arose in Gondor after the crowning of King Eldacar because his mother was a North-woman.  The Northmen were a culture of people believed to be inferior to the people of Gondor because they did not possess the blood of Numenor.  A group of Gondorian rebels, particularly in the southern provinces, protested the crowning of King Eldacar because of his lineage.  They believed the lives of the Kings would shorten.  Castamir was the leader of this group of rebels.
As the reign of King Valacar, father of Eldacar, neared its end, Castamir began openly rebelling in the southernmost provinces.  He rendered an army so that when King Valacar died in 1432, a civil war known as Kin-Strife began.
Eldacar was not friendless.  His forces managed to resist Castamir's until 1437.  But it was in that year that Castamir decided to besiege Osgiliath, the capital city of Gondor.  He and his rebels refused to let supplies or resources into the city, weakening their opponents.
Castamir won the fight at Osgiliath and Eldacar escaped north to Rhovanion with a number of his supporters.  However, the rebels killed a number of Eldacar's supporters including his son Ornendil.  In addition, Castamir burned Osgiliath and slaughtered many of its people.  He even destructed the Dome of Stars which once towered above the city.  The palantir of Osgiliath was lost in the Anduin River during this attack.
Castamir named himself King of Gondor.  During his reign, he focused on building fleets of ships in the south.  He moved Gondor's capital to Pelargir, a southern port on the Great Sea.  As the long years went by, the people of Gondor hated Castamir with increasing wrath.
In 1447, after having ruled ten years, Castamir was confronted by Eldacar and an army of Northmen and Gondorians.  Castamir was killed by Eldacar in the Battle of the Crossings of Erui and he managed to reclaim the throne of Gondor.
Castamir's sons and supporters escaped to Umbar where they became Corsairs.  These men came to cause Gondor trouble for centuries. 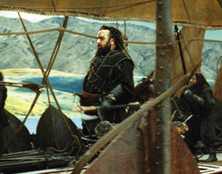 Decipher Card of Castamir
Castamir, also spelled Kastamir, comes from the Quenya kas meaning "head" and mir meaning "jewel."
Because he forcefully took the throne from Eldacar, Castamir was called the Usurper.  A usurper is tyrant, or someone who takes something forcefully without right.