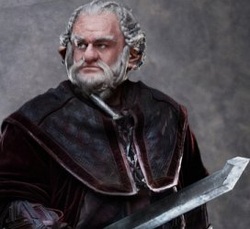 Dori played by Mark Hadlow in The Hobbit movie
Dwarf of Thorin and Company of the line of Durin. Dori was born sometime in the late Third Age.  Dori wore a purple hood.
In 2941 of the Third Age, Dori was chosen by Thorin Oakenshield along with eleven other Dwarves to accompany him in the quest to reclaim the Lonely Mountain and the riches there that had been taken by the great dragon Smaug.  On April 26, 2941, the Company arrived at the house of Bilbo Baggins and Dori played his flute at tea.
Dori was a physically strong Dwarf.  After the Company escaped the Goblins in the Misty Mountains, Dori carried Bilbo on his back through the tunnels.  However, an Orc grabbed Bilbo from behind and he was separated from the Company, only to return the next day.
When the Company was attacked by Wargs, they all climbed a tree.  There, Gandalf and Nori pointed out that Bilbo was no longer with them.  Dori realized that Bilbo was too small to climb the tree, so he reached down and grabbed him.
In early autumn, the Company reached the Lonely Mountain and the Battle of Five Armies took place.  Dori survived and received his share of the treasure.
After the quest, Dori settled in the Lonely Mountain.  He was alive at the time of the War of the Ring, and his date of death is not known.

The name Dori is an Old Norse verb for "to bore."  Dori is the name of a dwarf who appears in an Old Norse poem called Voluspa.