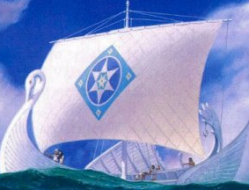 Earendil the Mariner by Ted Nasmith
Father of Elrond. Earendil was a great Elf-mariner of the First Age who went to the Valar for help in the war against Morgoth.  He was born in year 503 of the First Age.  Earendil was the son of Tuor, a man of the House of Hador, and Idril, the daughter of Lord Turgon of Gondolin.  Earendil lived in Gondolin for the first few years of his life.  In 510, the whereabouts of Gondolin were revealed to the enemy by Maeglin and it was attacked.  Though there were few survivors, Earendil and his parents were able to escape via secret paths that had been made by Idril.
Earendil's family escaped to the Havens of Sirion by the Great Sea by 511.  Another group of refugees joined Earendil's group, which included an Elf woman named Elwing.  Earendil loved the sea, and he began learning about ships.  Earendil's parents soon passed over the Sea into the Undying Lands in the far West, and Earendil had a dream to be reunited with them.
Circa 525, Earendil married Elwing.  Earendil became the leader of the refugees of men and Elves who lived in the Havens of the Sirion.   Earendil began taking many voyages in the Sea.  While Elwing was having her children, Elrond and Elros, in 532, Earendil was at Sea.  He was with Cirdan, Elf of the Isle of Balar.  Cirdan helped Earendil build a ship called Vingilot, which became one of the strongest and most important vessels to ever exist.
Earendil hoped to travel the Great Sea and discover far continents and even to be reunited with his parents.  In 534, he began traveling unknown seas in the far west near the shores of the Undying Lands, but a wind pushed him toward Middle-Earth.
In 538, the sons of Feanor attacked the Elves and men of the Havens of the Sirion.  Elrond and Elros were captured as prisoners and most of the other Elves were slain.  The sons of Feanor sought the Silmaril that was now the property of Elwing.
To escape capture, Elwing dove into the Sea with her Silmaril.  She would have drowned, but the Vala Ulmo, Lord of Waters, turned her into a bird.  She flew to Vingilot, the ship of her husband, and collapsed on top of it.  She soon returned to her true Elven form.
Both Earendil and Elwing were very concerned that their children would be killed by the sons of Feanor.  If this did not happen, they feared that Morgoth would strike again.  Rather than returning to Middle-Earth to face Morgoth again, Elwing convinced her husband to sail on to the Undying Lands to request aid in the war against Morgoth.  Accompanied by the Elf-mariners Aerandir, Erellont, and Falathar, Earendil agreed.
Earendil wore Elwing's Silmaril, and he used it to guide him through the Shadowy Seas to the Bay of Eldamar in the Undying Lands.  In circa 542, Earendil got off of his ship and walked through the Undying Lands.  His wife was told to wait behind, but she followed in secret.  For miles Earendil saw no one until he was summoned by the Vala Eonwe.  Eonwe brought Earendil before Manwe, leader of the Valar.
Earendil pleaded to the Valar to aid him in the war against Morgoth.  He told the Valar of the hardship and countless casualties that Morgoth had caused for both Elves and men.  The Valar agreed that this was indeed a problem that needed to be fixed, and they felt it was necessary to interfere.
But then Manwe came to the realization that Earendil had entered the Undying Lands when he was only Half-Elven.  He decided that Earendil and Elwing should choose to either be members of the race of men and eventually die or whether they should be considered Elves and live an immortal life in the Undying Lands.  Either way, neither of them would be permitted to return to Middle-Earth.  Both Elwing and Earendil chose to live an immortal life in Valinor.
As it turned out, both Elrond and Elros were spared by Maglor and they were also were given the choice between mortality and immortality.  Elrond chose to be of Elven kind, and he came to rule Rivendell.  Elros chose the life of a mortal man, and he became the first King of Numenor.
Aerandir, Erellont, and Falathar were sent back to Middle-Earth in another ship provided by the Valar.  The Valar themselves traveled over the Sea with immense strength and rage and they were prepared to challenge Morgoth.  Earendil was told to stand in the front of the ship and sail it through the Doors of Night and into the heavens.  He sailed in the night sky, and Elwing's Silmaril shined onto Middle-Earth, becoming one last hope for the peoples of Middle-Earth.
The enraged Valar arrived in Middle-Earth in circa 545 and they engaged Morgoth in the War of Wrath.  They fought until 587.  In the last year of the war, Morgoth sent forth evil Dragons led by Ancalagon the Black, but Earendil flew Vingilot into the host of Dragons and slew Ancalagon himself after one day and one night of warfare.
Earendil continued to guard the Doors of Night from the heavens, and he became a star in the sky known as Earendil, the brightest astronomical object apart from the Sun and the Moon.  Elwing continued to wait for her husband in the Undying Lands.
Galadriel captured some of the light of the Star of Earendil.  This light was very powerful, and she placed it into a phial which was used to ward off enemies.

Eärendil translates as "Sea lover" from the Quenya words eär meaning "sea" and the ndil meaning "friendship, love."
This name was given to him by Tuor because his father knew from éarendel, Anglo-Saxon for "ray of light."
Earendil was also named Ardamírë by his mother Idril.  This name means "jewel of the world" in Quenya, a reference to Earendil's Silmaril.
Earendil was called Azrubêl by the Numenoreans. The element azar means "sea" in Adunaic, the language of the people of Numenor.
Because of his heritage and great accomplishments, Earendil was also referenced as Eärendil Halfelven, Eärendil the Blessed, Eärendil the Mariner.