The Fellowship of the Ring: "The Council of Elrond," passim
The Return of the King: "The Battle of the Pelennor Fields;" "The Last Debate;" "The Field of Cormallen;" "Many Partings;" "The Grey Havens"

The Hobbit: "A Short Rest," passim

The Silmarillion: "Of the Voyage of Earendil," passim; "Of the Rings of Power and the Third Age"

The Unfinished Tales: "The History of Galadriel and Celeborn"

Circa First Age 532:
Elrond and Elros were born as the sons of Earendil and Elwing.

538:
After an invasion of the Havens of Sirion, Elrond and Elros were captured by Maglor, son of Feanor.  Their parents worried that they would be killed, but Maglor spared them.

590:
After the War of Wrath was won with the aid of the Valar, the great enemy Morgoth was banished from the world and the First Age ended.

32:
Elros was crowned the first King of Numenor after choosing to lead the life of a mortal man.

442:
Elros died in Numenor, his reign being one of the greatest of the Kings of Numenor.

Circa 1200:
Sauron tried to enter Lindon in a fair disguise.  Elrond and Gil-galad rightly did not trust him, so they refused him entrance.

Circa 1500:
Sauron found his way into Eregion and the Elven-smiths there helped him forge the Rings of Power.

c. 1600:
Sauron created the One Ring to rule them all, and the Elves realized that they had been deceived.

1693:
After Sauron declared war on the Elves, they hid the Three Rings of the Elves.

1695:
Sauron attacked the Elven realm of Eregion and Elrond stood against him.

1697:
Eregion was destroyed by the forces of Sauron and Elrond founded Rivendell for the Elves who survived the fall of Eregion.

1700:
A fleet form Numenor arrived in Eriador to drive out the forces of Sauron.  Sauron was temporarily.

1701:
A meeting was held in Rivendell and the Elves agreed to nominate Elrond as vice-regent of Eriador to the regent Gil-galad.  It was also decided that Rivendell would remain the only Elven stronghold in eastern Eriador.

3430:
The men of Gondor and Arnor formed an alliance with the Elves, an alliance that would by remembered as the Last Alliance.

3431:
The Last Alliance of Elves and men gathered their forces in Rivendell.

3434:
The allied forces of Elves and men marched upon Sauron's realm of Mordor and the War of the Last Alliance began.  Sauron's forces were defeated in the Battle of Dagorlad and the Elves and men advanced into Mordor and put Sauron's tower of Barad-dur under siege.

3441:
After slaying both Gil-galad and Elendil, Sauron was defeated by Isildur.  Isildur took the One Ring for himself, despite Elrond's actions to try to convince him to throw it into the fires of Mount Doom.  Because Isildur took the Ring, Sauron's spirit was allowed to live on.

Year 2 of the Third Age:
Isildur was killed in the Gladden Fields by Orcs attracted to the power of the One Ring.  The One Ring was lost in the Anduin.

3:
One of Isildur's squires Ohtar brought the shards of Narsil to Rivendell.

109:
Elrond was wed to Celebrian, daughter of Galadriel and Celeborn of Lothlorien.

241:
Elrond and Celebrian had a daughter named Arwen.

1300s:
The Witch-King, Lord of the Nazgul, declared himself Lord of Angmar.  Angmar was located in Eriador, and this geographical location threatened both Elves and men.

1409:
Elrond led an army of Elves from Rivendell to aid the men of Arnor in their war against the Witch-King.

1975:
The combined forces of Elves and men defeated the Witch-King in the Battle of Fornost.

1976:
The Ring of Barahir, the Sceptre of Annuminas, and the Elendilmir, items sacred to the Dunedain, were sent to Rivendell to be looked after by Elrond.

2509:
Celebrian was kidnapped and tortured by Orcs when traveling passed Redhorn Gate to visit her parents in Lothlorien.  Though she survived the attack, she was emotionally disturbed.

2510:
By the counsel of her husband, Celebrian left Middle-Earth and passed over the Sea into the Undying Lands.

2851:
The White Council met for the second time.  Gandalf confirmed that the evil presence in Dol Guldur was indeed Sauron.  Gandalf encouraged the White Council to strike Dol Guldur, but Saruman assured them that the One Ring had been lost in the Sea, and Sauron was powerless without it.

2933:
As he had done with all Chieftains of the Dunedain, Elrond fostered Aragorn at his home in Rivendell.

2941:
Summer: Thorin and his company of twelve Dwarves, a Hobbit, and a Wizard arrived in Rivendell.  Elrond showed the Dwarves how to read their map of the Lonely Mountain, and he also told the Dwrves that their swords were the swords Orcrits and Glamdring of Gondolin.
Autumn: The White Council met once again, and they unanimously agreed to strike Sauron in Dol Guldur.  Sauron fled Dol Guldur, but he would soon reclaim his lost realm of Mordor.

2942:
Date Unknown: Sauron re-established himself in his former realm of Mordor.
May 1: On their return journey from the Lonely Mountain, Gandalf and Bilbo visited Elrond in Rivendell.

2951:
Dates Unknown: Sauron openly revealed himself to be in Mordor.  After Elrond told Aragorn he was Isildur's heir, Aragorn fell in love with Arwen.  Elrond wasmost displeased because his daughter was immortal and Aragorn was not.

2953:
The White Council met for one last time.  Saruman falsely informed them that the Ring had flowed down the Anduin and into the Sea, and explained how Sauron would be powerless without it.

2980:
In Lothlorien, Aragorn and Arwen were betrothed, but Elrond told them they could not marry until Aragorn became High King of the Reunited Kingdom of Gondor and Arnor.

3002:
Bilbo came to live with Elrond in Rivendell.

3009:
Elrond requested that Arwen return home from Lothlorien due to the growing threat Sauron's servants posed in the Misty Mountains.

3018:
October 8: Elrond's scouts reported that Frodo Baggins was coming to Rivendell with the One Ring.  He was wounded, and the Nine Nazgul were pursuing him.
October 9: Elrond sent Glorfindel to find Frodo and bring him safely to Rivendell.
October 20: Elrond made the waters of the Ford of Bruinen wash out the Nazgul and drown their horses.
October 23: Elrond removed the shards of the Morgul-blade from Frodo's shoulder..
October 25: The Council of Elrond decided that the One Ring must be destroyed in the Mount Doom.
December 18: Elrond announced the nine members of the Fellowship of the Ring.
December 25: The Fellowship of the Ring departed Rivendell and headed south.

3019:
February: Elrond sent his twin sons south to help Aragorn in the Battle of the Pelennor Fields.
May 1: Coronation of Aragorn.  Though Elrond and his daughter did not attend, they headed south that very day.  Elrond was prepared to allow Aragorn to marry Arwen.
May 20: Elrond and Arwen spent the week with Galadriel and Celeborn Lothlorien.
May 27: Elrond and Arwen departed Lothlorien and headed south to Gondor.
June 14: Elrond and Arwen reunited with Elladan and Elrohir.  They traveled to Edoras.
June 16: Elrond and his children set out for Minas Tirith.
Midsummer's Eve: Elrond gifted Aragorn with the Sceptre of Annuminas, a symbol of Aragorn's new kingship of Arnor, and the hand of Arwen in marriage.
Midsummer's Day: Arwenand Aragorn were married in Minas Tirith.  Elrond attended the wedding.
July 22: Elrond and his daughter departed Minas Tirith to attend the funeral of King Theoden of Rohan.
August 14: After the funeral, Elrond and Arwen bid each other one final farewell before parting forever.
August 22: Elrond returned to Rivendell.
October 5: Elrond blessed Frodo and told him in the Woody End next autumn.

3021:
September 22: Elrond and Galadriel were reunited with Frodo in the Shire.  From there, they rode to the Grey Havens in an event known as the Last Riding of the Keepers of the Rings.
September 29: Elrond passsed over the Sea into the Undying Lands in the company of Galadriel, Celeborn, Frodo, Gandalf, and Bilbo.  When Elrond arrived in the Undying Lands, he was presumably reunited with his wife Celebrian.

Elrond:
Elrond is of uncertain meaning.  It contains the elements el meaning "star" in Quenya and rond meaning "vaulted."  This may thus translate as "vaulted star."
Because of his authority, Elrond was also called Master Elrond and Lord Elrond of Rivendell.

Peredhel/Peredhil/Half-Elven:
Because Elrond was only part Elven, he was called Half-Elven.  The Elvish term for this was either Peredhel or Peredhil.
Elrond was precisely 56.25% Elf, 37.5% man from his grandfather Tuor and his great-grandfather Beren, and 6.25% Maia from his ancestor Melian, but since he had the choice between Elves and men, he became purely Elven.

Below is a family tree of Elrond: 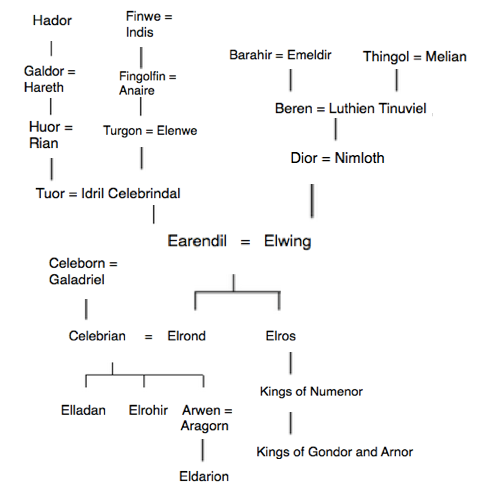