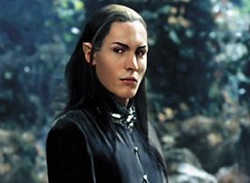 Jonathan Harding as Erestor in the New Line film
Advisor to Lord Elrond of Rivendell.  Erestor was an Elf who lived in Rivendell at the time of the War of the Ring in the Third Age.  Erestor's origins are not known.
Erestor attended the Council of Elrond on October 25, 3018 of the Third Age.  He thought it would be best to send the One Ring of the great enemy Sauron to Tom Bombadil because the Ring's evil power did not seem to impact him.  Everyone else argued that this idea was not a good one because though Tom himself was not affected, the enemy would eventually find out that he had the Ring and he or his servants may even raid Tom's house to find it.  The majority decided the Ring must be destroyed in the fires of Mount Doom from whence it was made.  Erestor commented that this was hopeless and folly, and the Ring-bearer, Frodo Baggins of the Shire, would be killed. Gandalf replied that this folly should be a cloak for the Ring-bearer, so folly that the enemy would not even be able to see it.
In 3019, Erestor went with Arwen to Minas Tirith after the War of the Ring.  Erestor and the company of Elves arrived at Minas Tirith on Midsummer's Eve.  Arargorn and Arwen were wed on Mid-year's day.
It is not known what became of Erestor, but it is likely that he passed over the Sea to the Undying Lands with his people before the beginning of the Fourth Age.