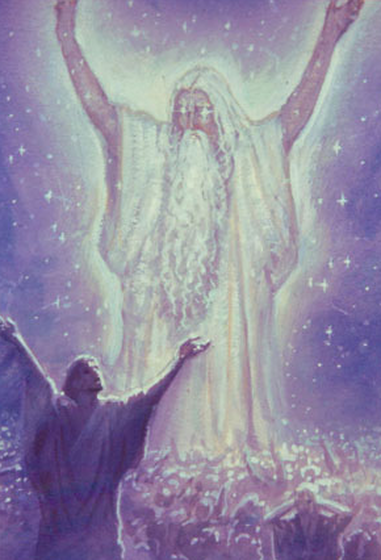 Eru during the Great Music, Melkor weaves opposing music by Ted Nasmith
High god and creator of Ea, the universe and everything that is.  He created reality by uttering the words "Ea, be" at the very beginning of time.  Eru was the creator of the Ainur, great high beings who included the Valar and the Maiar.  Eru was often called "The One."  He created the races of Elves and men (known as "The Children of Iluvatar"), and he also created Aule who, in time, created Dwarves.  Like Dwarves, it seems that animals were created by an Ainur rather than Eru himself.
It is not clear what kind of being Eru was, but it seems that "high god" is the best form of classification that can be given to him.  The idea that a sentient individual could have existed before the creation of Ea is quite abstract, and the idea that this individual could have knowingly created such a universe is even more hypothetical.  It is known that Eru lived in a place outside of the universe of Ea called the Timeless Halls, and he bore the source of creativity called the Flame Imperishable.
At the beginning of time, Eru created the material universe in an event known as the Music of the Ainur.  The Music of the Ainur was a great chorus sang by the Ainur that was led by Eru himself, and somehow this music created the material universe.  During the Music of the Ainur, a rebellious Ainu named Melkor weaved strange thoughts into his song.  The other Ainur did not understand the song of Melkor, for it clashed with the Theme of Iluvatar.  Melkor's music warred against Eru's Theme, and Eru sent forth a new Theme to challenge Melkor's.  But Melkor again opposed the Theme of Iluvatar by singing a strange song, and this song was so violent that many of the Ainur stopped singing.  But Eru sent forth a third Theme, and this time Melkor could not override it though he greatly opposed it.  Eru's beautiful, sweet song reigned supreme, and it lasted a long while until it ended in a single chord.
Eru told Melkor that he could not stand against the Theme of Iluvatar.  Thus by opposing Eru, Melkor was only helping Eru's magnificent cause because Melkor could never truly stand against the One.  Melkor was enraged by this judgement, but he hid his feelings because he secretly had a new prize in mind.  Eru showed the Ainur what had become of their music: the creation of the material universe of Ea.  Melkor begged to enter the world of Arda which had been created by Aule, claiming that he wished to spread Iluvatar's glory to that planet.  Eru allowed Melkor and the fourteen Valar and the Maiar to travel to Arda to prepare it for the arrival of the Children of Iluvatar, the races of Elves and men.  When Melkor and the other Ainur arrived in Arda, Melkor immediately announced that he was the ruler of Arda.  Melkor's brother Manwe did not understand Melkor's evil, but he feared that Melkor would start wars on Arda and Manwe did not want that.  Instead of waging war with Melkor, Manwe summoned more Ainur to protect Arda from evil, and Melkor fled to the remote, desolate regions of Ea far away from the world.  This would be the last of Melkor's interactions with Eru directly, but Melkor would eventually return to Arda to cause further devastation for its inhabitants.
Both Elves and men came to worship Eru, but Dwarves worshipped their own creator Aule.  Most of the creations in Ea were not the direct creations of Eru, including the world of Arda itself, for most things were the creations of the Ainur.  Some evil (or incredibly diluted) individuals came to worship Melkor instead of Eru, and there did not appear to be any consequence for this evil.  Individuals of other "good" religions in Arda who did not worship Eru (such as the Dwarves) were not punished by him for their spiritual beliefs either.
Eru rarely directly interfered with the events on Arda.  His vicegerent on Arda was Manwe, the greatest of the Valar.  According to Athrabeth Finrod ah Andreth, a philosophical debate between an Elf named Finrod and a woman of the Edain named Andreth, Eru would one day return to Arda to save his children.  It is not known if this ever amounted to anything because no such event ever occurred in the recorded history of Arda.
In the late years of the Second Age, Sauron convinced King Ar-Pharazon of Numenor to attack the Undying Lands, leading him to believe that such an assault could win him immortality.  But men were not allowed to venture to the Undying Lands because of the Ban of the Valar.  When Ar-Pharazon arrived in the Undying Lands with a fleet of ships ready to attack it in 3319 of the Second Age, Eru directly intercepted and broke the world.  It is known that Eru was responsible for this because the Valar could never have been powerful enough to do such a thing.  Eru changed the world into a spherical planet instead of a flat world and he bent the Seas so that men could never find the Undying Lands again.  Additionally, Eru sunk Numenor beneath the Sea and allowed only the Faithful Numenoreans to escape.  Sauron also escaped, and returned to Middle-Earth to continue his evil ways.
Ultimately, Eru continued to exist forever, but his interferences with Arda's history were scarce.  Apparently, at the end of the world, a Second Music of the Ainur took place, and in this music a new world was created.  It was thought that men played some sort of important role in the second music that would follow Dagor Dagorath.

Notice: Many Tolkien fans have speculated that Tom Bombadil, a mysterious being who was kind to Frodo Baggins and his companions, was actually Eru Iluvatar himself.  One friend of Tolkien's named Peter Hastings, who worked at the Newman Bookshop at Oxford University where Tolkien was a professor, criticized Tolkien's description of Tom Bombadil: "he is," making it seem as though Tom Bombadil were God himself.  Tolkien addressed this confusion by stating the following: "As for Tom Bombadil, I really do think you are being too serious, besides missing the point. [...] You rather remind me of a Protestant relation who to me objected to the (modern) Catholic habit of calling priests Father, because the name father belonged only to the First Person."

Eru means "the one" in Quenya.  It is derived from the word er meaning "one, alone."  Eru was simply called The One in Common Speech.
Ilúvatar is Quenya for "father of all" from ilúvë meaning "universe" and atar meaning "father."

The Silmarillion: "Of the Beginning of Days," passim
The Letters of J.R.R. Tolkien: Letter # 156
The History of Middle-earth, Volume X, Morgoth's Ring
All Pages Copyright © 2010, The Middle-Earth Encyclopedia