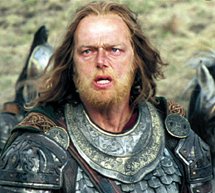 Bruce Hopkins as Gamling in the New Line film
Knight of Rohan during the War of the Ring.  Gamling was a originally from the Westfold.  He was born there sometime in the late Third Age.  Because the Westfold was geographically located near Dunland, Gamling was familiar with the culture and language of that region, and with the fact that the Dunlendings had a deep hatred of the Rohirrim.
During the War of the Ring, Gamling was left in command of Helm's Dike, a small fortress across the Deeping-coomb from the main fortress of Helm's Deep.  Gamling was reasonably elderly at the time, as his grandson helped him defend it.  Gamling had a defense army of 1,000 men, but all were either feebly old or childishly young.
Prior to the Battle of Helm's Deep on March 3, 3019, Gamling and his force retreated to Helm's Deep with Theoden's forces as Saruman's army advanced upon the fortress.  During the battle, Gamling and Gimli retreated with a small force from the Westfold into the Deep, where they defended the Glittering Caves.  There they remained until dawn of March 4, when Gandalf and Erkenbrand cam with a much larger force from the Westfold and defeated the armies of Saruman.

Movie Notice:  In Peter Jackson's film version of The Lord of the Rings, Gamling also participated in the Battle of the Pelennor Fields, though his participation was never mentioned in the book.

The name Gamling is of Old English origin.  It means "old man" and derives from the word gamol meaning "old." Because of his age at the time of the War of the Ring, Gamling was sometimes called Gamling the Old.