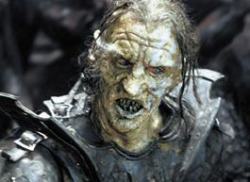 Stephen Ure as Gorbag in the New Line film
Orc of Minas Morgul.  Gorbag was the Captain of the Orcs of Minas Morgul at the time of the War of the Ring.  He served the Nazgul who lived in Minas Morgul, though he found them creepy and planned to leave Minas Morgul after the War and set up his own operation with Shagrat, Captain of the Orcs of the Tower of Cirith Ungol.
Gorbag was slightly worried about the warnings he had been getting of spies on the Stairs of Cirith Ungol.  On March 13, 3019 of the Third Age, Gorbag led a company of 80 Orcs to investigate the Stairs of Cirith Ungol, and he was met by another company led by Shagrat.  Shagrat and Gorbags' companies found the body of Frodo Baggins outside Shelob's Lair, and Frodo had been wrapped in the Great Spider Shelob's web.  Gorbag mistook Frodo for dead, but Shagrat informed him otherwise, and it was then that Gorbag noticed that some one else must have stabbed Shelob and escaped because if this was not the case Shelob would have eaten Frodo already.  Gorbag told Shagrat that a great Elf warrior might be on the loose, but Shargat ignored Gorbag.
Shagrat and Gorbag took Frodo to the Tower of Cirith Ungol to be questioned.  Frodo was still unconscious, and he was taken to the peak of the tower.  Gorbag spotted Frodo's mithril mail and he took it for himself, and Shagrat fought with him for it.  Gorbag used a knife to try to win back the mithril mail from Shagrat, but Shagrat strangled Gorbag and thought he was dead.  Gorbag was in fact alive, and he chased after Shagrat and tried to kill him with a piece of a spear in order to get back the mithril mail.  But Shagrat stabbed Gorbag in the throat, this time successfully killing him, and Gorbag's body was hewed.