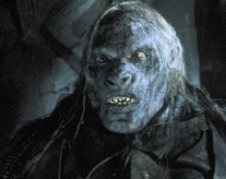 Peter Tait as Shagrat in the New Line film
Captain of the Tower of Cirith Ungol at the time of the War of the Ring.  Shagrat was a cruel, evil, and cunning Uruk.  He had terrible fangs and long, strong arms bred to kill.
In 3017 of the Third Age, Shagrat was ordered by Sauron to allow for Gollum to escape from Barad-dur because Sauron believed that Gollum was evil and still had a part to play in the War.  Shagrat and his guards spotted Gollum in March of 3019 and assumed that he had brought food for the Great Spider Shelob who lived in Cirith Ungol and fed upon birds and beasts.  Shagrat was informed on March 13 that spies were on the Stairs of Cirith Ungol, and Shagrat led somewhere between 30 and 40 Orcs to investigate the passage.  Shagrat was met by a company of 80 Orcs from Minas Morgul led by Gorbag.  The two companies found the body of Frodo Baggins wrapped in Shelob's web, and Gorbag assumed that Frodo was dead.  Shagrat knew otherwise, because he knew that Shelob had a special technique for feeding on warm blood.  But Gorbag said that Shelob would have eaten Frodo if she were not somehow fought off, and Gorbag believed that another enemy may be on the loose.  Shagrat ignored this idea.
Shagrat had received orders from the Great Eye to keep any prisoners alive and to strip them of their belongings and send them to Barad-dur.  Shagrat did as he was told: he took Frodo to the peak of the Tower of Cirith Ungol and stipped him of his belongings.  He kept Frodo prisoner for questioning.  When Gorbag saw Frodo's mithil mail, he grabbed it.  Shagrat took it from him, but Gorbag became greedy and fought for it.  Shagrat was wounded by Gorbag with a knife, and Shagrat responded to this wound by strangling Gorbag.  Shagrat was under the impression that Gorbag was dead, but he was not.  A fight started between the Orcs of Minas Morgul and the Orcs of the Tower of Cirith Ungol; most of the Orcs killed each other and Sam Gamgee began to climb the tower.
Shagrat killed Radbug by stabbing him and squeezing his eyes out; why he killed one of his own subordinates is not known.  Shagrat ordered Snaga to go to Barad-dur and report what had happened.  Snaga was met by Sam Gamgee on the stairs and he mistook him for a Great Elf Warrior and he refused to go down the stairs.  Shagrat threatened to kill Snaga if he did not do as he was told.  He chased Snaga down but he escaped.  Then Gorbag, who was still alive, lunged at Shagrat and attempted to take the mithril mail from him again, and Shagrat stabbed Gorbag's throat, this time successfully killing him.
Since Snaga had gotten away, Shagrat decided that he would go to Barad-dur himself and report what had happened.  On the stairs, he was confronted by Sam Gamgee who shone the light of the Elven blade Sting.  Shagrat pushed Sam and ran away from the tower, and Sam let him go despite the fact that he brought news of the Ring-bearer to Sauron.
Shagrat arrived at Barad-dur with Frodo's belongings, including the mithril shirt, on March 17.  Sauron killed Shagrat and gave the mithril mail to the Mouth of Sauron, who brought it to the Black Gate to show Frodo's friends who were waiting outside Mordor before the Battle of the Morannon.  Frodo's friends were greatly concerned when they were shown Frodo's belongings, and they feared that he was dead.