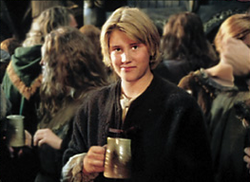 Guthlaf in the New Line film
Bearer of the banner of Rohan.  Guthlaf was a rider of Rohan who carried the banner of the Rohirrim, which was a white horse on a green field.
On March 15, 3019 of the Third Age, Guthlaf rode to war with King Theoden to the Battle of the Pelennor Fields.  He stayed near his king, holding the banner high.  The banner caught the attention of several foes, including a Chieftain of the Haradrim, but Theoden slew these enemies.
The Witch-King, Lord of the Nazgul, also spotted the banner of Rohan.  Mounted upon his Fell Beast, the Witch-King descended upon the battlefield and slew both Theoden and Guthlaf, shortly before being killed himself.  The banner of Rohan was given to the new King Eomer.
Guthlaf was buried in the Mounds of Mundburg after the battle.  His name was remembered in song.

The name Guthláf is of Old English origin.  It can be derived from the word guð meaning "battle" and láf meaning "remnant" or "survivor."