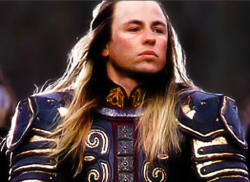 Decipher Card of Théodred
Son of King Theoden of Rohan.  Theodred was born in the year 2978 of the Third Age.  He was the only child of King Theoden.  Theodred's mother Elfhild died in child birth.
In 3002, Theodred's cousins Eomer and Eowyn were orphaned and came to live in Meduseld to be fostered by Theoden.  Eomer and Eowyn became like brother and sister to Theodred.
Around 3014, Grima Wormtongue became counsellor to King Theoden.  Grima was secretly in league with Saruman and began weakening the king's mind.  As Theoden's strength waned, Grima attempted to turn Theodred and Eomer against the king and even against each other, hoping to cause controversy in the royal house.  However, Theodred and Eomer remained loyal to each other and to their king.  In preparation for his invasion of Rohan, Saruman decided that it was vital for Theodred to be removed.
As prince and heir to the throne of Rohan, Theodred was the Second Marshal of the Mark.  He was in charge of the defense of the western Gap of Rohan and of Helm's Deep during the War of the Ring.  His position was not far from where Saruman lived in Isengard.
Saruman did not keep himself hidden from the eyes of the Rohirrim.  Theodred was well aware of the fact that Saruman was breeding an army fit to invade and conquer Rohan.  He sent for reinforcements from Edoras in February of 3019.  On February 25, Theodred's scouts reported that Saruman's forces were advancing from across the River Isen.  Theodred crossed the Isen to meet Saruman's forces head-on in the First Battle of the Fords of Isen.  Saruman's forces were not only made of orcs, but also beasts that appeared to be half-orc, half-man.  They immediately surrounded Theodred's eored, and he was shot down.  Elfhelm and Grimbold were able to rush to his aid, but they were overwhelmed by the number of enemies they faced.  However, the forces of Saruman now quickly and readily withdrew because their main objective of slaying Theodred had been completed.
After the battle, Elfhelm and Grimbold discovered that Theodred was alive, but only enought to utter his last words, "Let me lie here - to keep the Fords 'till Eomer comes!"  He died that day and was buried on a small island in the Isen with the rest of the fallen from the battle.  Their spears were planted around their bodies, and Theodred's banner stood tall.
After Theoden died on March 15, Eomer succeeded him as king.

Paris Howe Stewe as Theodred in the New Line film

Théodred can be derived from the Old English elements ðeod, which means "nation" and ræd meaning "wisdom."  This suggests that the name Théodred was the Old English phrase for "national wisdom," possibly implying that Theodred was very skilled at defending his country.