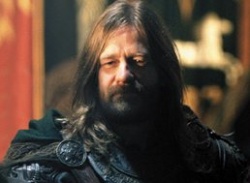 Elfhelm in the New Line film
Elfhelm was a rider of Rohan and captain of the East-mark.  He held this high position from year 3012 of the Third Age to year 3019.
On February 25, 3019 of the Third Age, Elfhelm fought in the First Battle of the Fords of Isen.  King Theoden's son Theodred was struck unconscious by an orc-man, and when Grimbold rode to save his life he was in great danger.  Elfhelm led four companies of riders to Grimbold's rescue.  After the battle was lost, Elfhelm and Grimbold discovered that Theodred was alive, but he died later that day after his last words.
Once news spread of Theodred's death, Erkenbrand of the Westfold assumed command of the West-mark.  Elfhelm was in charge of the Muster of Edoras, but began planning defenses for the anticipated Second Battle of the Fords of Isen with Grimbold.  Both men suspected that Saruman would strike again.
Elfhelm thought it wise to set up his cavalry defense on the east side of the Isen, assuming that Saruman's forces would come from the east.  Grimbold set up foot-soldiers on both sides of the river.
As it turned out, Saruman's forces would attack from in between the two companies, so when Grimbold called for aid from Elfhelm there was no answer.  What had happened was that Elfhelm's forces were driven eastwards by the overwhelming forces of Saruman.  Soon Gandalf appeared and ordered Elfhelm to ride back to Edoras with haste.
Elfhelm did not fight in the Battle of Helm's Deep.  Instead, he began mustering the Rohirrim at Harrowdale, from where they would ride to Minas Tirith to aid Gondor in the Battle of the Pelennor Fields.  Elfhelm led the first eored, which contained Merry Brandybuck and Dernhelm.  The men in Elfhelm's company failed to notice either one of them until Elfhelm tripped over Merry in Druadan Forest while spreading word that the drums that were heard were those of the Druedain Woses and were nothing to be feared.
Elfhelm was of great use to King Theoden in the days before the Battle of the Pelennor Fields.  Since he had been to Gondor before, he knew the lay of the land around Minas Tirith.  On March 15, when the Rohirrim reached the battlefield, Elfhelm and his company were positioned to the right of King Theoden.  During the battle, Elfhelm and his company worked to break the siege of Orcs around Minas Tirith.  Closer to the end of the battle, Elfhelm led a small company back to the outskirts of Druadan Forest where they cleared out the remainder of their foes who had positioned themselves in that region.
After the war was won, Elfhelm attended the coronation of King Aragorn at Minas Tirith on the 1 May 3019 of the Third Age.

The exact meaning of the name Elfhelm is uncertain.  It may have had Old English roots, containing the element helm meaning "helmet."