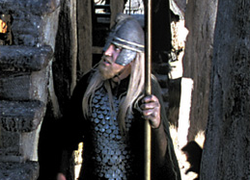 Grimbold in the New Line film
Rider of Rohan during the War of the Ring.  Grimbold was a Marshal of the Westfold of high rank.  He was under the command of Prince Theodred, son of King Theoden.  Grimbold's home was in Grimslade in the Westfold.  He was a brave and enduring man.
On February 25, 3019 of the Third Age, Saruman's forces launched a surprise attack on Grimbold's forces, who were stationed at the fords of Isen.  Grimbold covered the west side of the river while Theodred stationed himself on an island in the river's center.  Saruman's forces attacked from the east, and included orcish Warg-riders, Uruk-hai, and men from Dunland.
Theodred was immediately overrun, and Grimbold rode to his aid.  However, Grimbold's position was also attacked, and he was aided by Elfhelm.  Though Elfhelm and Grimbold both survived the battle, the forces of Saruman were ultimately victorious in the First Battle of the Fords of Isen, for the single purpose of this battle was to kill Theodred.  Both Grimbold and Elfhelm held out the Isen until the next day.
Because of Theodred's death, Erkenbrand, Lord of the Westfold, assumed command of the western defenses of Rohan.    While he gathered the Westfold's scattered forces to prepare to defend against Saruman's invasion, Grimbold was put in charge of the defense at the fords of Isen.  Elfhelm was put in charge of the defense at Edoras.
Though Elfhelm felt that defending the River Isen was no longer important, Grimbold still feared that a defense there was necessary.  He felt that Saruman's forces could easily intercept the various forces of Rohan at Isen.  So it was decided that Grimbold would remain in defense of the Isen while Elfhelm readied his forces to the east of the river.
Grimbold's position at the river was attacked by midday on March 2.  His forces were outnumbered, and Rohirrim resistance could only last until dusk.  At sundown, Grimbold's forces retreated to the eastern side of the river.  Saruman's forces followed them across the river and surrounded Grimbold's camp.  Grimbold's riders put up a shield wall that Saruman's forces could not breech, but they kept them surrounded.  Grimbold sent Dunhere and a company of riders out of the shield wall to attack Saruman's forces from outside the wall, which gave Grimbold's forces time to escape in the muddled confusion.  Though it had cost him many of his riders' lives, a greater number of orcs had been killed.  Now Grimbold needed to work to defend the Westfold elsewhere.
On March 3, Grimbold and his men were met by Gandalf who told them ride southward to fight with Erkenbrand's army in the Battle of Helm's Deep.  On March 4, Erkenbrand and Gandalf arrived at Helm's Deep with a large force from the Westfold, and they broke the siege of Saruman's armies around the fortress.
On March 15, the Rohirrim arrived in Gondor to aid Minas Tirith in its battle against Mordor.  Grimbold fought as Third Marshal of the Mark in replacement of Erkenbrand, who stayed behind at Edoras to defend it.  Grimbold led a company of riders on the left flank of the army.  He was killed during the Battle of the Pelennor Fields, and buried in the Mounds of Mundburg with many of his fellow riders.