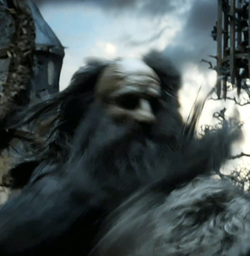 Thrain II, as briefly seen in The Hobbit movie
King of Durin's Folk; father of Thorin Oakenshield.  Thrain II was born in 2644 of the Third Age.  He was the son of Thror.  Thrain II was of the Line of Durin.  Thrain had three children: Thorin born in 2746, Frerin born in 2751, and Dis born in 2760.  Thrain lived with his family in the Lonely Mountain.
In 2770, Smaug the dragon attacked the Lonely Mountain, killing many Dwarves as he made the mountain his lair.  Thrain and his three children escaped.  They wandered for many years.  As Thrain and his companions wandered through Dunland, Thror decided to reclaim Moria.  Thror was killed by Azog and Thrain thus became King of Durin's Folk.
When Thrain heard the news from Nar that Thror had died, he sat without word for one week, deep in thought.  He finally decided that the Dwarves would gather their forces and march upon the Misty Mountains to challenge the Orcs who has overtaken them.  In 2793, the War of the Dwarves and the Orcs broke out.  The Orcs were not unprepared.
The Orcs hid their leader, Azog, so the Dwarves could not find him, but he did not remain in hiding.  In 2799, Azog led a massive force of Orcs to Dimrill Dale where the Battle of Azanulbizar broke out.  Thrain II led the first assualt upon the enemy forces, and his son Frerin was killed after being driven into the forest near Mirrormere.  Thrain II lost an eye and almost a leg, but he survived.  Despite their many losses, the Dwarves won the battle and Azog was killed.  The Dwarves did not resettle Moria because the Balrog still lurked there.  They instead settled in the Blue Mountains.
The Dwarves became rich off of their findings in the Blue Mountains, but Thrain was not happy.  He wanted to return to his home in the Lonely Mountain.  On April 21, 2841, Thrain took his father's map and key and led a company of Dwarves on the quest.  He took his Dwarf-Ring, which was at the time greatly desired by the great enemy Sauron.  Sauron sent beasts, Orcs, and birds in his service to bring Thrain to Dol Guldur, the fortress of Sauron in Mirkwood.  Thrain was captured in the eaves of Mirkwood in 2845 and imprisoned under Dol Guldur in Mirkwood.  Thrain's Ring was taken from him and destroyed and Thrain was tortured on a daily basis until he forgot even his own name.  Thrain forgot about the quest to reclaim the Lonely Mountain.
In 2850, the wizard Gandalf came to Dol-Guldur and found Thrain screaming about the last of the Seven Rings.  He gave Gandalf his father's map of the Lonely Mountain as well as the key to the secret door.  Thrain died that day in Gandalf's presence.  Gandalf held onto the map for many years, since he did not know who Thrain II was or what to do with the map, until in 2941 he met Thrain's son Thorin in Bree and they agreed to reclaim the Lonely Mountain then.

Thrain is a dwarf seen in the Old Norse poem Voluspa, his name meaning "craver."  There was an earlier King of Durin's Folk named Thrain.